Entire Team USA Sings Happy Birthday To A Squirming Kevin Durant, Who Was Born On September 29 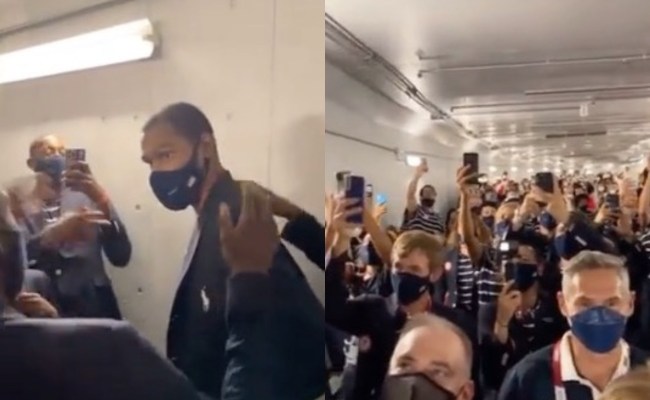 Gotta be honest, ever since he came to the Brooklyn Nets, I’ve come around on Kevin Durant. And truthfully, it has nothing to do with the fact that the Nets are kinda sorta my team (I say kinda sorta because I’m still pissed about them leaving New Jersey a decade or so ago) and everything to do with the man himself: I’ve simply learned to respect that Kevin Durant is, unapologetically, Kevin Durant. For a man who apparently has thin skin, he also weirdly does not give a FUCK what people think about him. People have been telling KD to get off Twitter for years, to stop trolling random fans, to stop using burner accounts, and not only has he not listened, but he’s reminded everyone of that fact every step of the way. Plus, I feel like we underrate how miraculous his comeback from injury was. People weren’t sure if he’d ever be the same KD again. Whoops.

So, with all that said, Kevin, allow me to wish you a Happy 33rd Birthday along with the rest of Team US… wait, what’s that? Kevin Durant’s birthday isn’t until September 29th and the basketball team was simply trolling the notoriously awkward KD? Even better.

They got the entire US Olympic squad to sing Happy Birthday to KD…and his birthday isn’t for another 2 months 😭 @KDTrey5 pic.twitter.com/nVQZhnak24

The United States Men’s National Basketball team will kick off their Tokyo 2020 journey when they take on France in their first Group A game on Sunday, July 25 at 8 a.m.

RELATED: We’ve Got Some Team USA Drama On Our Hands Thanks To Kevin Durant And Bam Adebayo