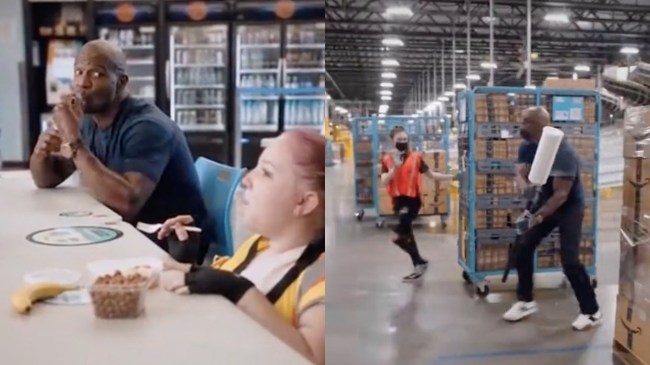 Amazon has enlisted Terry Crews to star in an “Amazon employee for a day”-type advertisement and the clip is NOT going over well on social media.

The ad, which Amazon rolled out on their TikTok, sees Crews fulfilling the duties of a warehouse worker in a vaguely patronizing fashion — “Wait, I get to drive a forklift?!” Crews exclaim at one point. Twitter users were quick to drag the advert, pointing out how the company is using money they should be giving to their employees to instead hire Terry Crews for a ridiculous commercial.

In addition to Amazon themselves, Crews was particularly dragged for his willingness to participate in such an advertisement, with one Twitter user jokingly suggesting he would’ve done the same ad for slavery if the technology existed at the time. Regardless of you issues with Crews, though, this ad is ultimately a sign that we’re inching closer and closer to a full-blown dystopia with every passing hour.

This is Terry Crews cosplaying as a poor person to do an ad for union busting.
He's basically John Cena's character from Suicide Squad now. https://t.co/Inb5MBKFTk

If TV and the internet had existed in the 1700-1800 Terry Crews would’ve done an ad for slavery just like this. https://t.co/wHXDnMVtjL

Amazon: We can't afford to pay our workers more.

Also Amazon: We're going to pay Terry Crews a boatload of money to come roleplay as a poor person for a few hours. https://t.co/QflTqy5j7a

if terry crews convinced u to take an amazon warehouse job, u deserve whatever happens https://t.co/m5hSa2JqOB

me: damn i gotta work there

when my order from amazon arrives crushed to shit bc terry crews didnt know wtf he was doing pic.twitter.com/9wFfpc5leq

dawning on me that terry crews & president camacho have similar politics pic.twitter.com/I4RCUXxK93

you can get terry crews on board with just about anything as long as you say "hey terry, we're just trying to bring some positivity to this." that's all he needs to hear, doesn't matter if it's an ad for a gulag https://t.co/91laigX7C2

Terry Crews would’ve told Rosa Parks to get tf up.

>ad shows amazon workers in a secret reunion to unionize
>suddenly, wall breaks
>its terry crews doing the pecs dance
>ITS ME
>proceeds to assasinate the workers
>UNIONS BAD
>legs turn into rockets, lift off pic.twitter.com/OI4JDGYYQi

This is actually the second horribly cringy Amazon moment in recent days, as a clip of Jeff Bezos’ girlfriend giving Leonardo DiCaprio the flirty puppy dog eyes went viral earlier this week. To make matters worse, Bezos then attempted to get in on the joke and sent a “warning” to Leo on Twitter. “Hahaha, Jeff Bezos is such a jokester! He’s just like one of us!” is how he probably imagined people reacting to this tweet. Just admit you’re trying to turn our reality into a combination of Black Mirror and Squid Game already, Jeff.

Leo, come over here, I want to show you something… @LeoDiCaprio https://t.co/Gt2v9JZTNz pic.twitter.com/KqGLB839NI