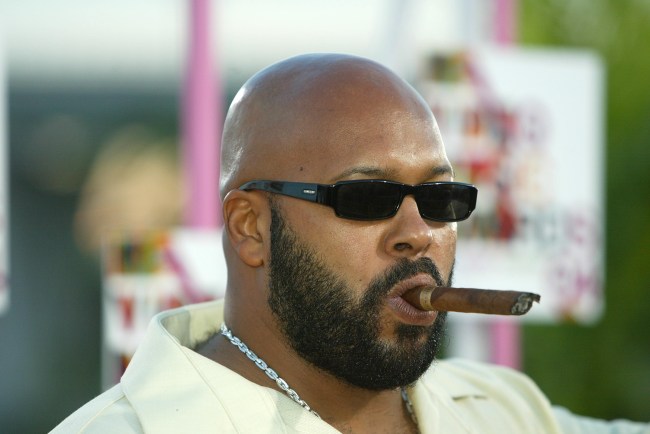 Suge Knight is known to be one of the most ruthless and vicious music managers in history. The Game knew Suge was one of the most dangerous men in hip-hop so he came prepared — he was strapped. And when he first met the Death Row boss, he pulled a gun on Suge Knight and lived to tell the tale.

Marion “Suge” Knight Jr. managed some of the greatest gangsta rappers of all-time, including Dr. Dre, Snoop Dogg, and Tupac Shakur. Suge has a lengthy rap sheet and has been charged with assault with a deadly weapon, violated his parole, punched a nightclub parking lot attendant, got into a fight at a hotel in Arizona, and pleaded no contest to manslaughter in connection with the death of a man during a hit-and-run incident. Knight is currently serving a 28-year prison sentence. In 2015, Knight killed Terry Carter with his Ford F-150 pickup truck.

Suge is infamously known for shaking down Vanilla Ice. As the story goes, Knight had his entourage dangle Robert Van Winkle over the 15th balcony at the Bel Age Hotel. Suge threatened to drop Vanilla Ice to the ground unless he signed over his royalties to Death Row.

Suge, who has been gang-affiliated, is an imposing figure, so when the then-25-year-old rapper decided that he would pack some heat when he met the Death Row founder. In an appearance on the Los Angeles radio station Power 106, The Game gave an interview to Nick Cannon, who has his own problems at the moment (RIP Nick Cannon). Game revealed that he first met Suge following a Vibe Awards after-party.

“I’ve been face-to-face with Suge, on both sides,” The Game said. “Suge rolled up on me one time after the Vibe Awards after-party with like, 60 gangsters.”

“He wanted to press for something I said in my song about him, which I said it because I’m from Compton. I’m really from Compton,” The Game said on Nick Cannon Mornings. “And I felt like Death Row and Suge, and that whole era took so many lives that didn’t get mentioned.”

“In the city. A couple of those was friends and big homies,” The Game claims. “So, I said a few things about Suge that he didn’t like, and they rolled up on me.”

“I wasn’t having no type of back down,” the Compton rapper revealed. “I drew my gun on all of them, and I held my own, and from that day forward, it was nothing but respect with Suge.” That’s quite the “compliment,” “I pulled a gun on you because I respect you.”

“I throw jabs sometimes, mainly ’cause I can, and everybody knows that I’m an asshole sometimes, so that’s what I do,” he added.

The Game had his gripes with Suge but admitted that Knight did a lot for West Coast hip-hop. “We can’t take away what he did give, the [Tupac] albums, the Snoop albums, the who Death Row.”

The Game’s relatively new track Stainless featuring Anderson .Paak, reflects on his relationship with Suge Knight. The rap song is off of The Game’s alleged final album titled Born 2 Rap that was released on November 29.

“I went from wanting to be Suge to hating Suge to f*cking with him/ 28 years a long ass time, it’s f*cking with him,” The Game raps a reference to Suge’s prison sentence. “Talked to him on the phone the other day/ About how he could’ve signed me before Dre… If that n**** Bron Bron rap it would sound like this/ Somewhere between Cube and ‘Kiss, I can’t miss.”