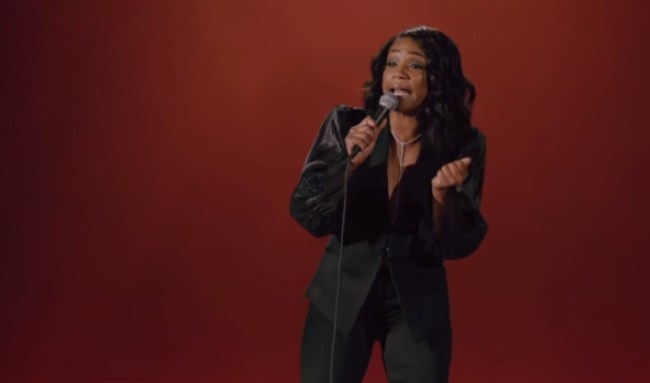 It was a tough New Year’s Eve for many including Anderson Cooper who struggled mightily with tequila shots as well as NBC’s NYE special where Chrissy Teigen’s eye nearly got gouged out by Leslie Jones. Tiffany Haddish also had a rough New Year’s Eve when she bombed so hard during her stand-up show that people walked out and her excuse wasn’t the best.

Haddish’s show on NYE was at the James L. Knight Center in Miami, Florida, where tickets for the show ranged from $50 to $250 plus fees. Tiffany admittedly had been partying until seven in the morning the day of the New Year’s Eve show and said, “Ciroc was still in her system.” Who among us hasn’t?

Then a few hours later after this Instagram post, Tiffany not only flubbed some jokes, but completely forgot parts of her comedy routine. “I really wanted to talk about some stuff and can’t remember none of it,” Haddish said during her set.

According to a viewer named Andrew Chestnut who drove from Virginia to Miami, he said he was invited on stage to tell jokes by Tiffany after she wasn’t getting the job done.

I didn’t go up meaning to heckle. I drove all the way from VA to show love and laugh into the New Year. She had an off night. Thought I’d get my money’s worth by getting a pic cuz it’d be cool. I asked her and she started wanting to make jokes about my shirt and stuff.

she the cornball for thinking ppl were really gonna let her get away with not coming prepared to a show in Miami on New Years Eve. I’m just the dude who wasn’t rockin’. What kinda comedian says they don’t have any jokes .. mannnnnnnnnn. You didn’t lose any money lol.

I didn’t call her any names.. didn’t say yell “she not ready” and “tell a joke” then leave like a lot of ppl did. I walked up and asked for a pic respectfully.. after she invited ppl who didn’t walk out to fill empty seats and passed out shots .. and talking to ppl in the crowd.

I took my video busting out laughing.. basically what I saw as commensurate to a pic and getting my money’s worth after looking forward to a good show and getting joked on a bit. And she even invited me to tell jokes and I said “I’ll at least try” but security wouldn’t let me.

I went to go see if @TiffanyHaddish was actually funny. I ended up doing this. Conclusion: She is not funny. Horrible show. In her defense, she said she was having a rough night. She didn’t have to be up there. She ended up inviting me up on stage to tell jokes. 🤦🏾‍♂️😂 pic.twitter.com/Ze1BPzeY9S

Others voiced their disappointment over Tiffany’s comedy performance.

@TiffanyHaddish just bombed her show in Miami. We left in the middle of her set along with a lot of other people. Very disappointed, I hope that you are better prepared before your next show. #SheNotReady 😡

tiffany haddish#SHENotReady – Went to see show in Miami it was terrible. Walked out

After some of the audience walked out, Tiffany invited those who stayed to move up to the empty seats. At one point during her set, Haddish said, “This is weird for me. Now, this is going to be on TMZ or whatever.” The actress was correct as it was on TMZ about 12 hours later with video of the performance. Haddish talked about her mother getting out of the mental institution and also chugged Ciroc during her comedy set.

The Girls Trip actress apologized on Tuesday with a tweet captioned: “Yes this happened. I wish it was better Miami. I prayed on it and I have a strong feeling this will never happened again.”

Yes this happened. I wish it was better Miami. I prayed on it and I have a strong feeling this will never happened again. Tiffany Haddish Bombs, Drinks with Fans Instead https://t.co/4QxPn0j0xc via @TheRoot

Let’s hope Tiffany rebounds and delivers the quality comedy stand-up that made her a star.