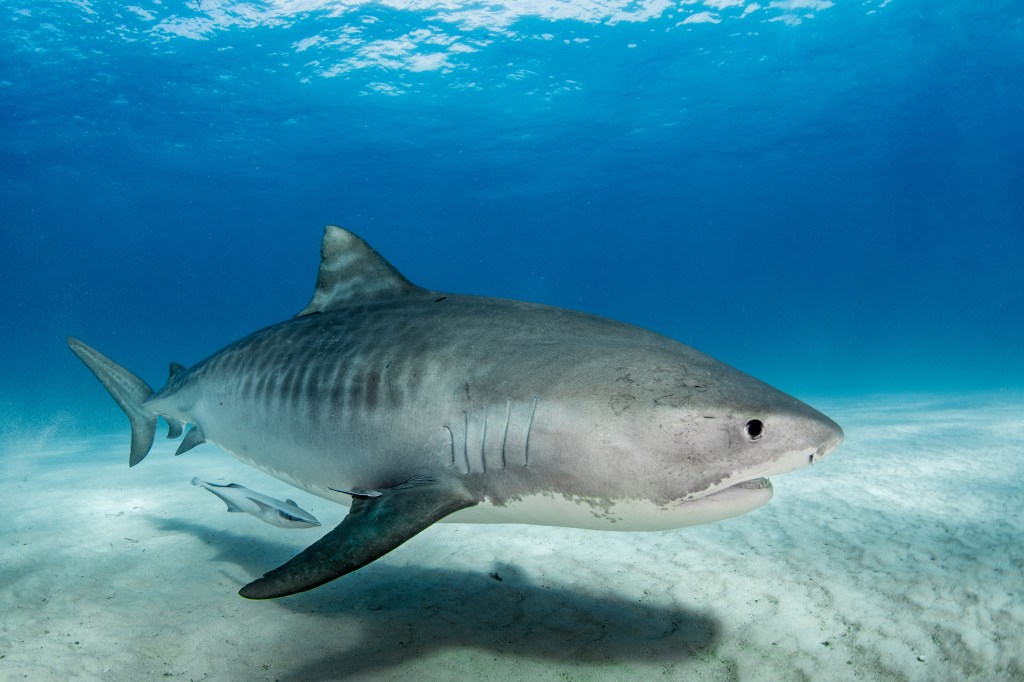 This footage of a tiger shark feeding frenzy off of Rottnest Island in WA is difficult to wrap our minds around. Here we see a blue whale carcass that has floated into very shallow water and it’s being devoured by an estimated 30 sharks who showed up for an easy meal. Most of them are tiger sharks.

Processing the size of these animals is tough because blue whales are truly massive. Blue whales can grow up to 110 feet long but typically measure 70 to 80 feet. And an average blue whale weighs more than 33 adult elephants. Wrap your mind around that for a second.

Tiger sharks can grow up to 18-feet and weigh up to 1,400 pounds. They’re massive. So when 30 of these absolute units show up to feast on a blue whale carcass there’s plenty of meat to go around but there are A LOT of apex predators in the area. So it makes perfect sense the Rottnest Island Authority (in Western Australia) closed swimming in the area to keep everyone safe.

A drone captured some surreal footage of this blue whale carcass feeding frenzy and boaters in the area also snapped some interesting photographs. Check it out:

We have incredible pictures tonight of a shark feeding frenzy off Rottnest Island, scores of predators feasting on a huge whale carcass and shutting down beaches.#9News | Nightly at 6pm pic.twitter.com/IvcI0JF0VE

A shark advice has been issued for Thompson Bay off Rottnest Island, with a number of sharks feeding on a whale carcass this morning. Swimmers have been ordered out of the water with local beaches closed by rangers. See the story tonight at 6 on 7NEWS. #7NEWS pic.twitter.com/ZPILOI0beq

A recent tweet from Surf Life Saving WA announced the whale carcass was successfully dragged out to sea. There are still a ton of sharks in the area being drawn in by the blood in the water. But those same sharks will likely follow the carcass out to sea and keep feasting on the easy meal.

DPIRD (Fisheries) advise that the whale carcass located at Thomson Bay, Rottnest has been successfully towed west of the island. Beach closures remain in place as residue may still attract sharks to the area. See more: https://t.co/tP3LSd9jSM

It’s been a wild time in recent weeks for ‘Shark Feeding Frenzies’. And not just in Australia. A few weeks ago in North Carolina, the water was bubbling at a fishing pier from the sharks feasting on baitfish and they were so ravenous the pier itself was shaking.

And while this wasn’t a feeding frenzy, this drone footage of great white sharks coming within feet surfers in California is surreal!