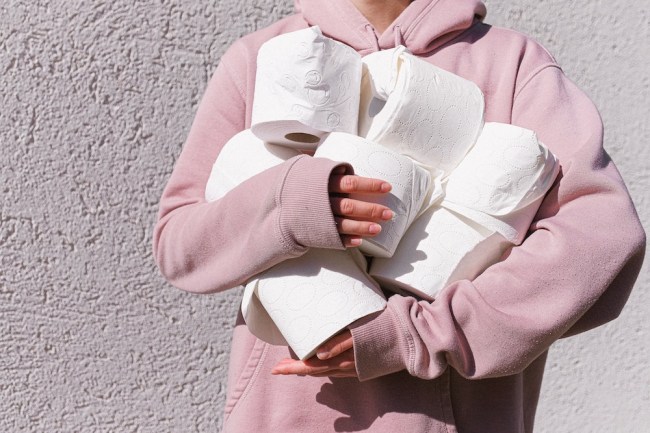 Photo by Anna Shvets from Pexels

Working from home is the new normal for millions of Americans. Even when the pandemic passes (hopefully) many companies will transition to staff working from home for more often.

The past few months have proven that workers are just as effective clocking in from their own kitchens – unless they’re drunk – and companies save thousands of dollars each month on renting space and supplying an office.

Working from home has had an effect on the world in a way no probably envisioned and it’s connected to our asses.

No, Americans aren’t buying comfier desk chairs or gaining weight working next to the kitchen. People are spending a ton of money on soft toilet paper.

According to the Natural Resources Defense Council, the cushy tissue that was flying off shelves earlier in the pandemic “uses material that comes primarily from clear-cutting forests” while office buildings tend to count pennies and buy toilet paper from recycled fibers.

The NRDC reports that nearly 60% of at-home toilet paper in the U.S. comes from this virgin material.

In the latest study, the group handed out F grades to brands from Procter & Gamble Co., Georgia-Pacific, and Kimberly-Clark Corp.—the three largest U.S. manufacturers of toilet paper—for the environmental impact of their products.

The heavy reliance on virgin fibers is releasing an “enormous Pandora’s box” of carbon emissions, said Jennifer Skene, a co-author of the NRDC report along with Vinyard. Logging in the Canadian boreal forests region, which stretches from the Yukon to Newfoundland, emits 26 million metric tons every year, the report estimates, an amount which is equivalent to the emissions produced by 5.5 million passenger vehicles.

“As tissue remains one of the fastest-growing sectors in the paper industry, investments in virgin fibers will likely continue in years to come,” according to the NRDC.

So if you want to help the environment, either buy cheap toilet paper or poop less.