Tyrese Tries To Explain Why He Started A Beef With The Rock, That He Lost, Badly 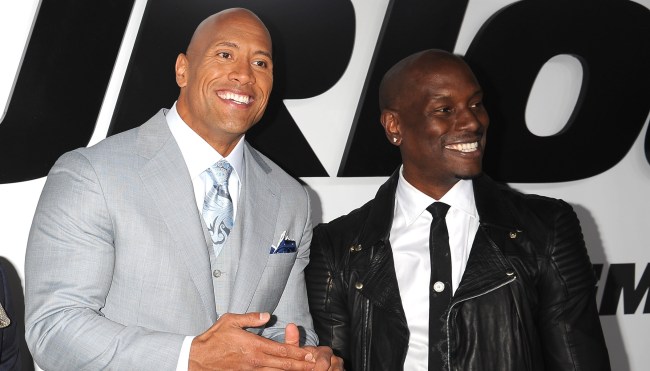 Dwayne “The Rock” Johnson was just named the highest paid actor in the world for the second year in a row by Forbes magazine – and he doesn’t even have a movie coming out in 2020.

Tyrese Gibson, The Rock’s co-star in numerous Fast and Furious movies, also will not be appearing in a movie in 2020.

That is pretty much where the similarities stop with those two.

Which is why it was so odd to see Tyrese go HAM At Dwayne Johnson and start a beef last year over The Rock’s Fast and Furious related Hobbs and Shaw movie and blaming DJ for his money and family problems.

Then, when Hobbs and Shaw premiered, Tyrese continued to fire shots at The Rock, talking about how the film didn’t make that much money.

That didn’t end well for him when The Rock tweeted about how happy he was that Hobbs and Shaw made $333 million globally on its opening weekend.

Thank you everyone for makin’ this an exciting first week of box office for our lil’ spin-off @hobbsandshaw.
#1 movie and $333M worldwide, ain’t too shabby.
And remember, the best way to shut the mouth of a 🤡 is to flex with success and a smile.
😉💪🏾💀@sevenbucksprod pic.twitter.com/rxYtNzmFL7

The Rock then followed that little jab up by putting Tyrese in a body bag, writing on Instagram, “Assassins quietly play chess♟loud clowns play checkers. Thank you audiences worldwide for this incredible support and massive win. Very cool and we’re grateful for the love 🙏🏾 #hardestworkersintheroom #hungryhumble #nocandyass🤡s.”

The “no candyasses” comment refers to when Johnson called out certain cast members of Fate of the Furious back in 2016.

This week, however, Tyrese was singing a very different tune when discussing The Rock during his appearance on Instagram with Fat Joe.

“It really just came down to survival,” said Tyrese. “I think, at the end of the day, if you could ever see yourself saying ‘You know what? I don’t have a competitive bone in my body.’ I pride myself literally on not beefing and not going at nobody, not having no issues with nobody. But, you know, I’m a hood n***a that will protect survival at all costs.”

He continued, “It’s not in me to say anything new about that man. I wish him the best. He’s a great father and now a husband and, you know, literally if you look at footage and photos all over the internet, he’s a giant bear. He’s just a great, great guy with a big heart and we just kinda got into a situation that ended up playing out for the world to see. But I don’t have any ill will feelings and we may end up doing Fast 10 and 11 together. You just never know.”

“I got love for the Rock,” Tyrese added. “I wish him well. He’s one of the biggest movie stars in the world and I look up to him and respect him.”

Something tells me that with comments like that, and after the massive success The Rock had with the Hobbs and Shaw movie, Tyrese is still in “survival” mode.