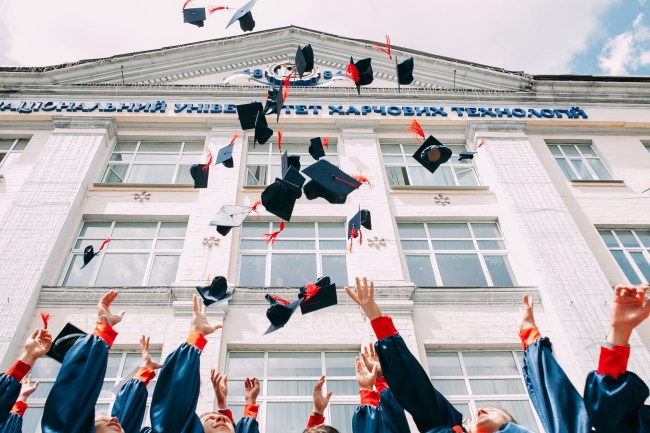 Of the many things on the ever-expanding list of casualties stemming from the current situation, I’d argue graduations are one of the biggest losses, as students across the world are missing out on the pomp, circumstance, and “Pomp And Circumstance” of a traditional ceremony.

Thankfully, people are stepping up across the country to make the best out of a less-than-ideal reality. For example, some graduates will have the incredible privilege of getting their diplomas while crossing the finish line at Daytona International Speedway (which honestly kicks the ass of the way things are usually done).

Celebrities have also chipped in by offering their services as virtual commencement speakers, with everyone from Tom Hanks to Arnold Schwarzenegger helping to make the class of 2020’s graduation memorable.

Now, I’m not a celebrity, but I still would like to offer my commencement speech services to anyone who wants them; perhaps a small liberal arts college I’ve never even heard of or an unaccredited university trying to do everything possible to appear legitimate.

So I thought I’d go ahead and give the powers that be a taste of what I bring to the podium.

“Good evening students, faculty, families, and distant relatives who are watching this virtual ceremony when you could have just lied and said you were and used this time to catch up on Ozark instead. Seriously, it’s not like there’s a quiz at the end to make sure you actually watched the entire thing.

What a momentous occasion this is. Unless you pulled a Van Wilder, you’ve spent the last four years gaining the knowledge that will help you navigate the turbulent waters of the real world. The fields of music production, philosophy, and whatever industries need people who studied ancient Greek and Latin are lucky to have you among their ranks.

The journey through the world of higher education is arduous. “Arduous” is a word you should probably know at this point, but I know this isn’t an Ivy League school, so I’ll tell you it means “difficult” just in case [note: this should get a big laugh. The president of the university will probably shake his head, point at me, and then whisper, “This guy”].

However, the more arduous the journey, the more satisfying the destination.

For instance, no one is ever that excited about having to go to Pittsburgh, but if you’ve endured several flight cancellations or missed a layover or two while trying to get there, it feels pretty good to arrive and one of those sandwiches with the french fries in them will taste much better than they objectively are.

For some of you, your journey through the traditional education system is over. There are others who will continue their schooling for years to come and continue to pay tuition in the process. If you ask me, it seems like a bit of a racket but that’s a discussion for another day—perhaps when I’m inevitably invited back to speak at one of your master’s or doctorate ceremonies.

Making the choice to pursue a degree in the first place is a brave one. It’s a path riddled with late nights studying, days sitting in the quad reading chapter upon chapter from a book about developments in chemistry in the early days of the Soviet Union, and games of beer pong with such ridiculous house rules that you never quite know what’s going on.

While writing this, I was reminded of a story about a guy I once knew who could’ve been a great golfer. He probably could’ve gone pro. All he needed was a little time and some practice. He decided to go to college instead and did pretty well. At the end of his four years—just before he got his degree—he was kicked out. Why? For putting around at night.

That’s right. Just putting around at night….with the daughter of the dean! You know who that guy was? Take one good guess [another note: no one will be able to actually guess because this is all virtual, but for the purpose of this hypothetical, let’s say there’s a chatroom where people can type in their guesses]

No. You’re all wrong. That guy was my roommate, Mitch. He was a pretty solid dude that didn’t deserve what happened to him.

My point is that some of you could’ve gone on to become a famous golfer if you’d never gone to college. If you’ve never played golf before, then you probably made the right choice. However, if you abandoned other passions because you felt getting a degree was a safer option, you’ll never know what might have happened if you hadn’t. You can only hope you won’t regret it when everything is said and done.

Each of you will soon receive a piece of paper, which will be thicker than a normal piece of paper because that’s what we do to help convince you that your decision to give us all the money you did was justified. That piece of paper is your ticket to letting employers know that, yes, you can read and write and have experience with the Microsoft Office suite.

I hope you cherish the time you’ve spent at this fine institution, and while you may be sad that you’re not going to be able to cap things off by throwing your hat into the air with your fellow classmates, you should know you’re not missing out. Those hats are dumb. It almost feels like making you wear something that looks so stupid on such a big day is like some weird form of hazing. I know it’s done in the name of tradition but there was a time when the same could be said for having your ass paddled while trying to join a frat. It might be time to rethink them.

In conclusion, congratulations to the class of 2020, and good luck on the rest of your life’s journey. Also, if at any time on that journey you find yourself in need of a speaker for something—maybe a birthday or retirement party; perhaps a bar mitzvah—do not hesitate to hit me up.