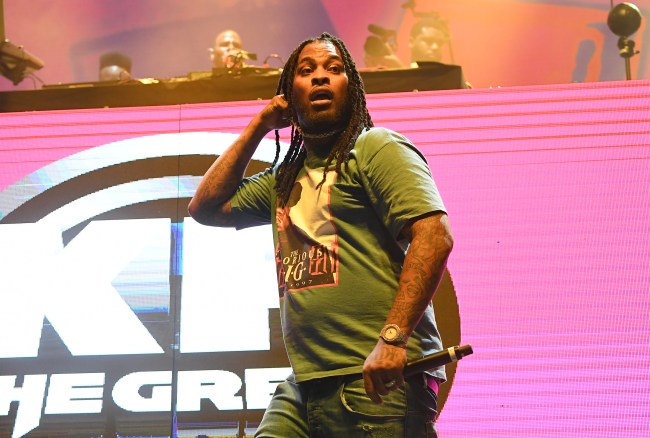 Rappers and Hip-Hop fans love nothing more than debating who are the greatest rappers in history. They can’t get enough of it and it’s an endless loop of people typically arguing over the same group of G.O.A.T’s.

I don’t know if you heard, but Eminem recently murdered Mariah Carey’s ex-husband Nick Cannon on social media. Nick thought they were in some sort of rap battle and Slim Shady was able to put Nick in a bodybag without ever even releasing his own diss track. The internet’s still letting Cannon hear it.

In a possible attempt to build on all the talk about Eminem, Atlanta rapper Waka Flocka Flame probably thought he was going to set the ‘gram on fire when he recently posted a ‘LET’S DEBATE’ image on Instagram about how André 3000 of Outkast ‘can out rap Eminem any day’.

A lot of rappers were quick to pop into the comments on Waka Flocka Flame’s IG post and share their agreement that André 3000 is ahead of Eminem. Miami-based rapper Pouya said “Andre 3000 is the greatest rapper ever in my eyes but he’s more than just a rapper, all around artist. He’s the GOAT to me honestly”.

This would be some solid debate fodder if it wasn’t for Eminem’s ‘Till I Collapse’ where Marshall Mathers shared his personal list of the greatest rappers in history and wouldn’t you know it, Eminem ranked himself several spots behind André 3000. Eminem’s list goes:

“I got a list, here’s the order of my list that it’s in;
It goes, Reggie, Jay-Z, Tupac and Biggie
Andre from Outkast, Jada, Kurupt, Nas and then me

Here’s a YouTube clip of ‘Till I Collapse’ if you need a refresher on that.

Sure, Eminem could’ve changed his mind over the years. That list might look completely different today than it did back then. But there was a time and place when Eminem straight up said that André 3000 was ahead of him on the Mt. Rushmore of Rap so I don’t get the need to try and stir things up.

Side note, if you’ve never seen the exact moment that Outkast flipped the Rap world on its head you need to watch it. From the Source Awards when Outkast was getting booed. Everything was East vs. West back then with Atlanta not getting the respect they deserve. It was wild. “The South got something to say” took everyone by surprise.

Inject that moment into my veins. In the argument of the ‘Greatest of All Time’ you can’t ever leave Outkast off the list. Ever.