What Are The Consequences Of Getting Into A Bar Fight? 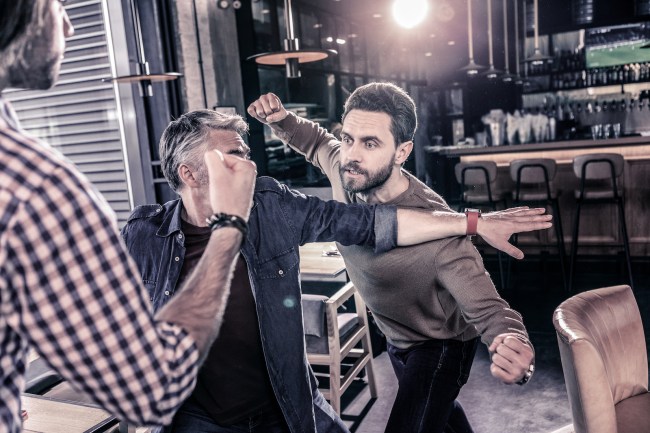 Getting into a bar fight is sort of a rite of passage among the young, dumb and full of come.

The testosterone coursing through their balls wouldn’t have it any other way.

They are the youth gone wild, a semi-erect whirlwind of piss and vinegar whose motto is: Go ahead, try me, motherfucker!

Some of these fellas might have gained a bit of a reputation back in high school for being a badass willing to throw down at the drop of a hat.

And now that they are mingling with the 21-and-over crowd, they’re hoping, hell, they’re praying that they can gain some notoriety in the real world by cracking the skulls of some loud-mouthed punks.

It might start with one of them saying to the other, “what the fuck are you looking at, pretty boy?” Or trouble could arise simply because some dude was talking to another guy’s girlfriend.

Hell, we’ve even seen people get their asses handed to them, just for playing the wrong music on TouchTunes.

All sorts of dumb shit can get two men to lock horns, especially when large quantities of alcohol is involved.

Fortunately, it is more likely than not that a heated confrontation between two swinging dicks is going to end up getting diffused before one of them takes a real savage beating.

But sometimes, regardless of how hard the people in the middle might try to break that shit up, there is just no stopping chaos from erupting.

This is typically when the cops get called in to handle the situation, and people start going to jail for all sort of offenses that they may have never considered.

Firstly, it doesn’t matter what part of the country a person resides, fighting in public is against the law.

Sure, we see videos of dudes like UFC-douche-duker Connor McGregor sucker-punching old men at a bar without any apparent repercussions, but the fact of the matter is the cops will flat drag your ass to jail for starting shit in civil society.

In fact, fists don’t necessarily have to fly for a person to get into trouble for fighting.

There are some cases when you can be charged with a crime even when there hasn’t been any violence at all. It might happen something like this:

Some dude accidentally bumps into you while you are carrying drinks back to your table, but instead of leaving it alone you go full-blown redneck on his ass.

Lots of trash talk comes spewing from your lips, and you even threaten to take the guy outside to show him just how much it would hurt to have your size 13 jammed inside his wiener hole.

But he doesn’t want anything to do with that, so he backs down. Meanwhile, the bartender is on the phone, asking the police for assistance.

Although there was absolutely no violence, you are probably headed to jail for disturbing the peace. It is a misdemeanor offense that can lead to additional jail time (maybe 30 days, sometimes up to a year) and hefty fines.

So you might want to calm down and pick your battles wisely.

There are other instances, too, where a confrontation doesn’t necessarily have to take a turn for the violent to be considered a serious crime.

Assault is one of those charges that most people do not think they can be hit with unless they, well, hit somebody.

But this isn’t exactly true. A man can be charged with assault even if he only attempts to inflict bodily harm on another person.

If a guy just intimidates someone to the point of making them fear that harm might come their way, police can get him for assault.

Now, as long as a weapon wasn’t flashed around during the dust-up, this crime is typically treated as a misdemeanor.

But if so much as a beer bottle was brandished in anger (it doesn’t have to be smashed against anyone’s head), it can be treated as a felony, which can get a person locked up for years and squeezed for thousands of dollars in fines.

Remember, no actual physical harm has to come to another person for police to get you on assault.

If a fistfight does break out, however, there is also a possibility of a battery charge.

If nobody was injured during the attack, the aggressor could get off with a misdemeanor.

But if someone was hurt (even the slightest scrape or cut), prosecutors won’t fuck around.

They will come after you full steam ahead with felony charges, and if you don’t have a good attorney, you could end up in prison for a while.

The only real way out of a battery charge is if the accused can argue self-defense in a court of law.

That’s a tough sell, though, when witness testimony is showing that you were the one starting shit.

Sadly, just telling the judge, you were acting like a drunken idiot on the night of the fight isn’t going to be enough to save your ass from the slammer.

But on the bright side, you’ll get plenty more opportunities to prove how much of a badass you really are from behind the walls of a state penitentiary.

Let’s try and take it easy out there, okay, fellas!