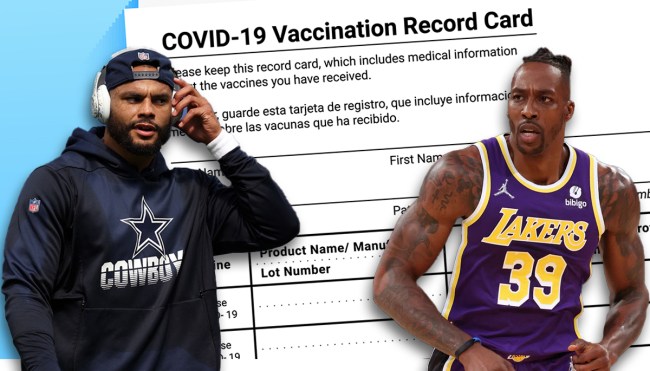 On Wednesday,  NFL fans were treated to one hell of a surprise when they learned Aaron Rodgers will be sidelined for Sunday’s contests against the Chiefs due to a positive test. While the Packers quarterback said he’d been “immunized” prior to the season, we’ve since learned he simply received “homeopathic treatment from his personal doctor to raise his antibody levels,” which plenty of NFL fans are convinced Shailene Woodley had a hand in.

After the news broke, Green Bay running back Aaron Jones declined to comment on the situation by citing “HIPAA,” which made him the latest in a long line of pro athletes who’ve deployed that term to avoid answering vaccine-related questions while simultaneously highlighting he has no idea what HIPAA actually is.

That was the route Dak Prescott opted to take over the summer when he was asked about his vaccine status at a press conference.

Dallas Cowboys QB Dak Prescott on whether or not he is vaccinated: “I don’t necessarily think that’s exactly important … I think that’s HIPAA.”

(It is not HIPAA, which prohibits health professionals from revealing your medical records.) pic.twitter.com/TgKajt4eng

A month later, Kyle Busch lamented that “HIPAA doesn’t exist anymore” while bemoaning the increase in the number of businesses that require people to verify they’ve been vaccinated before entering.

I just — I just wish I was as unbothered as some people at the ignorance that you broadcast when you go out in public and throw around terms that you clearly don’t understand.

Because, goddammit, this is not what HIPAA is. It takes 60 fucking seconds to enlighten yourself. pic.twitter.com/c8GUF4XR4X

In September, a couple of NBA players got in on the action, as Kyle Kuzma asserted himself as a HIPAA scholar before admitting he had no clue what it actually referred to a day before Dwight Howard got an education from a reporter after playing a similar card. 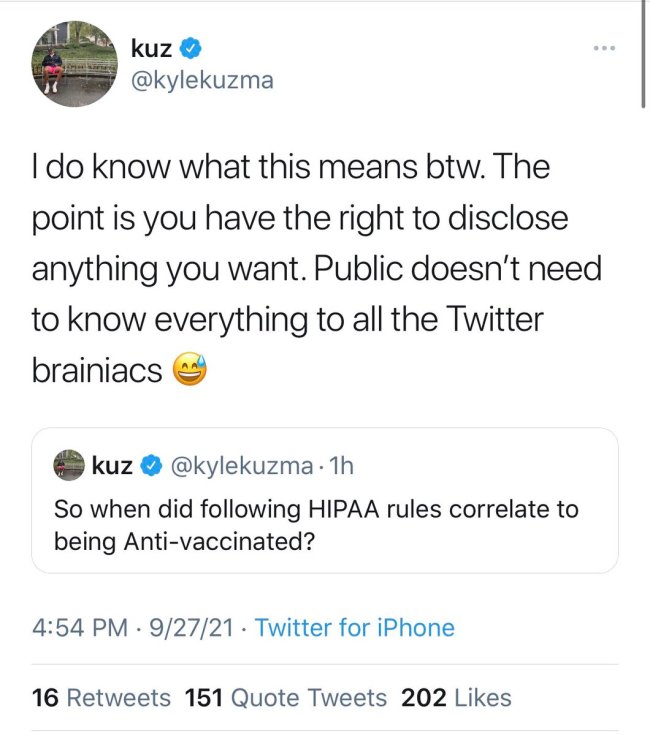 Reporter: “That’s not what HIPAA is, but ok.”pic.twitter.com/KnMcKQedme

As a result, I figured I’d take some time to help out all of these guys and other pro athletes thinking about going the same route by briefly outlining exactly what HIPAA is—and, more importantly, why it has literally nothing to do with questions concerning whether or not you’ve been vaccinated. 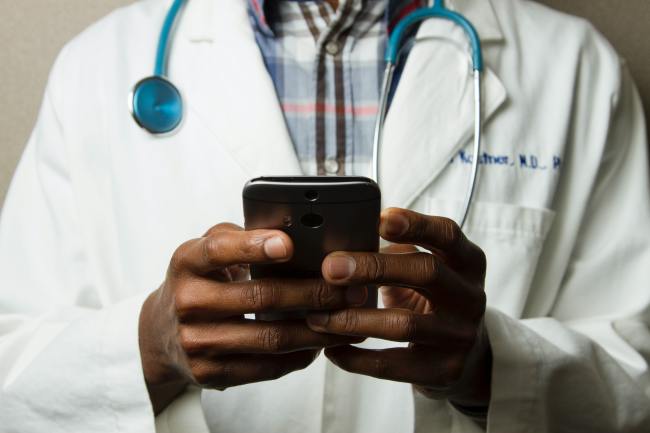 HIPAA is an acronym for The Health Insurance Portability and Accountability Act, a federal law that was passed in 1996 to legally codify doctor-patient confidentiality and protect people from having personal medical information disseminated to others without their explicit consent.

According to the CDC, the primary purpose of HIPAA is to:

Under the law, healthcare providers, insurance companies, and other entities with access to patient information are prohibited from sharing it with any third parties who are not instrumental in facilitating care (or charging people money for said care). The statute also contains a clause concerning “public interest and benefit activities” that makes exceptions for certain cases—like allowing private entities to verify vaccination status in the midst of a global pandemic stemming from a highly-transmissible airborne disease (most businesses aren’t even governed by HIPAA in the first place).

Now, it’s worth stressing professional athletes are under no obligation to share if they’ve been vaccinated with members of the press, but merely asking someone about their status is not the “HIPAA violation” so many people seem to operate under the assumption that it is.

I’m sure this will be the article that solves this issue once and for all.