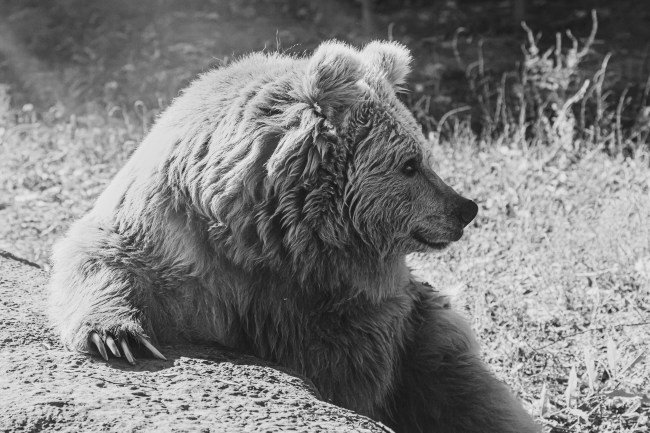 If Tiger King taught us anything, it’s that the people who claim to be the “scientists” and “conservationists”—who fancy themselves on the side of helping the animals—are often just as bad as those who wish to profit from or interact with the animals for personal pleasure. If Joe Exotic’s G.W. Zoo was a Red Roof Inn, at best, Carole Baskin and her “refuge” are an airport Ramada. Case in point:

“I mean, I get it. I am a bear biologist, and I am super interested in viewing this white grizzly bear. It is definitely a rare animal,” said Sarah Elmeligi, who is also the author of the new book “What Bears Teach Us,” which looks at human-bear interaction from the ursine perspective.

“I think, as a society, we need to recognize that sometimes our drive to view wildlife is driven by a selfish need to take a photo and post it to social media or to share it with our friends and family,” or just to say we saw it, she said.

When photos of the bear landed online, it was not news to park officials, who have been quietly watching the white beast grow for two years after it was first spotted as a cub with its mother, a bear known to staff.

All hail Sarah, the resident Bear Biologist, who chides us for wanting a peek at this glorious creature. What’s that? These experts have been “quietly watching” the bear for TWO YEARS? Hmmm. Call me crazy, but something tells me these “experts” have been working on their white grizzly marketing plan that entire time. For two years, they’ve been printing placemats, keychains, postcards, aprons, stuffed animals, and localized monopoly boards with the white grizzly as Boardwalk. Their gift shop is bursting with merch, ready to collect fuck-you Beanie Baby money, all thanks to their new star attraction. Why have they waited for two years? To create buzz, of course. You wait until people are jumping out of their skin for one look at whitey and that’s when capitalize. And it all starts with a serendipitous spotting from some unsuspecting family, rolling through the park. I think that’s how the California gold rush started too.

Still, don’t mess with this bear please. We need this right now. We gotta believe in something. Doesn’t matter if they’re brown, black, or white—all bears are cute and cuddly and enjoy delicious salmon and want to be hugged.

There is a new white grizzly in Banff—which is basically unheard of—and experts are really worried it’s going to get hounded by crowds looking to see a unique animal. Their message is clear: leave it alone, for its sake and yours. https://t.co/CKPuKH7H5u