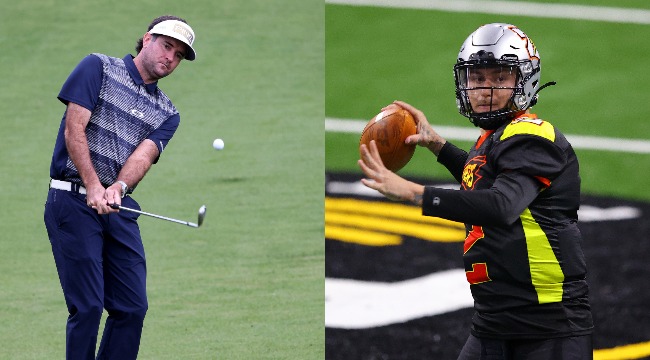 The year is 2033. Johnny Golf embarks on a 12-foot putt at Augusta to force a sudden death playoff with two-time Masters champion Charlie Woods. Johnny Golf takes a long pull from his e-cigarette before cooly tapping it in to win his first Green Jacket. He throws up the money signs to the raucous crowd and then punches 110-year-old Bob Barker in the nose for no apparent reason.

Manziel recently announced his vision for the future on the Green Light with Chris Long podcast.

Manziel spent his summers growing up playing playing golf at Hollytree Country Club in Tyler, Texas, and claims he is currently a 0-1 handicap.

Do you think Johnny Manziel has what it takes to make it on Tour? 🤔 pic.twitter.com/aBpdponq0K

Two-time Masters champion Bubba Watson isn’t as hopeful that Manziel can improve improve his game enough in over a decade to compete with even the anonymous pros in his sport.

Two-time Masters champion @bubbawatson weighs in on how realistic that goal is.

“There’s always a chance that he can make a name for himself and get in these events. But, I mean I’m giving myself 12 years to become an NFL quarterback, ya know what I’m saying? It ain’t gonna work.

Don’t get me wrong. He’s a freak athlete and he’s very good. But we’re talking about a level that, not even my level. Trying to beat the top 200 in the world, top 500 in the world. That’s going to be pretty hard.”

When I reminded Bubba that Johnny is a near-scratch golfer and 12 years is plenty sufficient to achieve the 10,000 hour mastery rule, he laughed it off.

“Let me start training now. Throwing some footballs. Maybe be a backup punter. Maybe I could be a holder. I don’t know. That ball comes fast from the long snappers so I might not be able to catch it.

Don’t get me wrong. You gotta have a dream. Champions Tour maybe. I don’t know how old he is now but, no, it would be very tough. I’m trying to be as nice as I can be. I actually like Manziel, even though he dogs me. I think he’s a great athlete.”

Watson did a nice job of holding his tongue here, especially seeing as less than a month ago, Manziel brutalized Bubba over his TikTok video at the Pro-Am for no apparent reason.