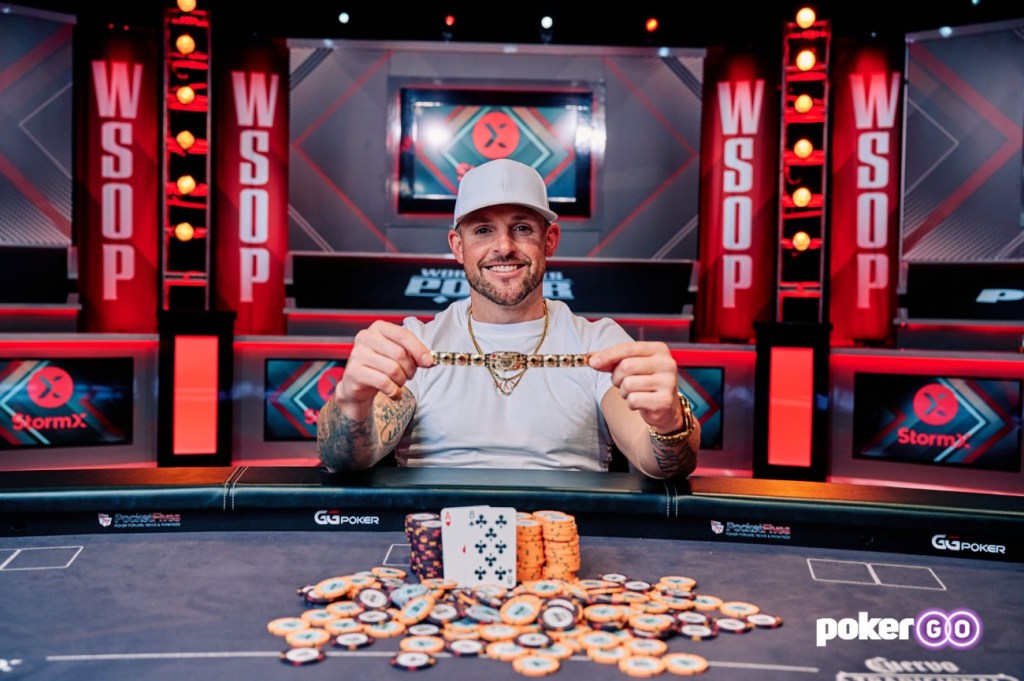 The 2022 World Series of Poker is in full swing right now in Las Vegas with event #36 (of 87 total) commencing later today. We have seen enough poker so far to get a sense of which pros are running really hot right now and which aren’t. Which makes this potential WSOP bad beat (or victory?) and interesting discussion…

That group of hot players includes Jack Schindler, David Peters, and Koray Aldemir who are 1st, 2nd, and 5th in the current Player of the Year rankings right now. Also near the top of that list is Mike Jucich (12th in POY points) who won the 2022 WSOP Event #21: MONSTER STACK No-Limit Hold’em.

Event #21 was a $1,500 buy-in tournament that drew in a whopping 6,501 players and a total prize pool of $8,678,835. Depending on how you view this hand below, Jukich won because this was either the most glorious victory of the most brutal bad beat of the 2022 WSOP (so far). Here’s the PokerGo video with a rundown of the play below:

Most Brutal WSOP Bad Beat Yet? Or The Best Victory?

As for how this hand played out, the video starts on the flop so we don’t see any of the pre-flop betting. There’s an update from the WSOP website I’ll include below, but let’s try and break it down anyway…

At this point during their heads-up match for the WSOP gold bracelet, Mateusz Moolhuizen was the chip leader with 177 million chips to Mike Jukich’s 128 million chips. It wasn’t terribly lopsided but after this hand, things got VERY skewed.

What we don’t see here is Mike Jukich raises 8,000,000 chips with KsQh and Mateusz Moolhuizen calls from the Big Blind. The blinds were 2M/4M and a 4M BB ante so it’s not a massive raise and a pretty easy call for Moolhuizen to make except that he held 6c2c.

The enticing aspects of the 6c2c is the hand is suited and they’re low. Presumably, with the 10M raise from Jukich he had stronger over cards so he was calling here to try and hit two pair or smash a flush or suck out a straight and he got lucky on the flop.

The pre-flop odds were STACKED against Mateusz Moolhuizen…

Moolhuizen decides to try and trap his opponent and checks his two pair. Jukich fires back a bet of 6 million chips. Mateusz Moolhuizen then re-raises to 19 million chips and there is now 45,000,000 chips in the middle of the pot.

Jukich just decides to call the 19 million raise and the turn brings the two of hears. Moolhuizen has Jukich dominated with a full house of 2s and 6s to Jukich’s Kings and 2s. Keep in mind that Jukich is now looking at two pair with the King in his hand and the 2s on the board.

At this point, there are just two Kings left in the deck and Mike Jukich needs one of them to make a stronger full house. He has only a 5% chance of winning the hand…

Moolhuizen bets 20 million chips with his full house made and Mike Jukich comes back over the top all-in. Since Moolhiuzen has more chips his WSOP tournament was at risk and it came down to just two kings.

So what do you guys think, most brutal bad beat or best victory? I say ‘bad beat’ only because it wasn’t too difficult for Moolhuizen to call the initial raise with his 2c6x and from there he was ahead until the river. But Mike Jukich did have a commanding hand pre-flop and ultimately finished with the better hand…

Career WSOP earnings for these two