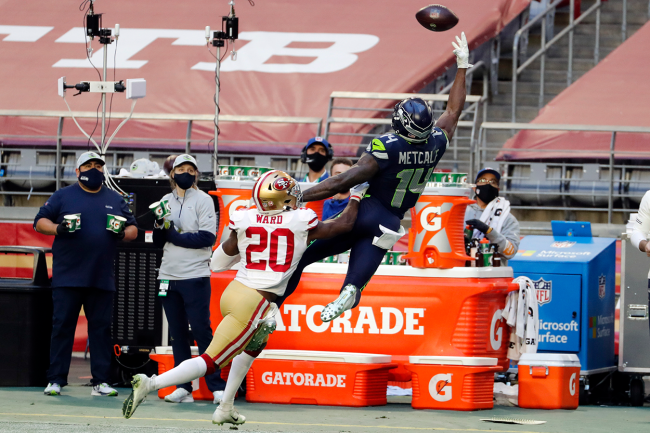 San Francisco safety Jimmie Ward and Seattle wide receiver D.K. Metcalf have beef with one another that dates back to 2020. When the 49ers and Seahawks met for a regular season matchup in November, the two got into it on the field.

Jimmie Ward doesn’t back down from anyone, including DK Metcalf 😤💪🏽 #49ers | #FTTB pic.twitter.com/NVvB8VaImO

After the game, Metcalf would not share what was said between the two.

DK Metcalf said the game was getting chippy. He couldn't share the words he and Jimmie Ward exchanged in the second half.

"I don't know if I can disclose that communication."

Now, two years later, Ward wants all of the Metcalf smoke once again. The 30-year-old defensive back recently called out the 24-year-old wide receiver.

As speculation continues to swirl around a potential Metcalf trade, Ward begged that Seattle keeps him for at least the matchup between the two teams this season. He wants to line him up.

“D.K. straight,” he said. “I hope that Seattle don’t trade him, man, because it’s gonna be oof, they’re gonna be target practicing boy. But we’re gonna line his a** up.”

The Seahawks lack significant talent in quite a few places and Metcalf will be the go-to target for Drew Lock this fall. That will make it easy for opposing defenses to key on the Ole Miss alumnus even more than they already do.

As Ward continued, he continued to reiterate that he plans to line Metcalf up. He talked a big game about what he and the San Francisco defense plans to do with the Metcalf matchup and once again pleaded with Seattle to keep him around.

“Oh, we’re gonna line his a** up,” Ward said. “Please, please don’t trade him, please let him go through it what the f*ck I’ve been through in my early years. And when they trade a lot of players, and a lot of players retire and this and that. And man I hope they don’t.”

#49ers S Jimmie Ward didn’t hold back about lining up DK Metcalf next season on his IG Live 👀😂 pic.twitter.com/uAuHXvjRMB