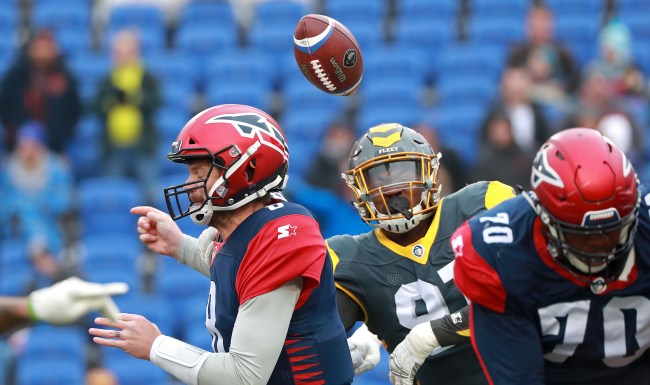 The sad, sordid saga of The Alliance of American Football (AAF) continues to roll on and the news just keeps getting worse.

After a rather impressive eight-week run, the wheels came completely off the AAF when it was forced to shut down league operations. Since that day, it’s become very apparent that the league was basically operating using smoke and mirrors.

The shadiness of the operation has been repeatedly exposed by emails, lawsuits, and stories from some the men who played for the league.

Making matters somehow worse for those affected, AAF co-founder and CEO Charlie Ebersol was reportedly paid $14K by the league two days before its bankruptcy filing.

And now, this week, Reggie Fowler, the main original investor for the AAF, has been arrested and charged with committing bank fraud and operating an unlicensed money transmitting business.

Fowler, a former minority co-owner of the Minnesota Vikings, invested nearly $25 million in the AAF.

According to a new in-depth story by Conor Orr of Sports Illustrated, “The Curious Rise and Spectacular Crash of the Alliance of American Football”…

Reggie Fowler, once a minority stakeholder in the Minnesota Vikings, had committed to being the Alliance’s primary investor during its first season and had already injected nearly $25 million. But withdrawals from Fowler’s various foreign and domestic banks were suddenly,and without a full explanation to the Alliance’s board, held up around Christmas.

That explanation would come months later. The Department of Justice announced on April 30 that Fowler had been charged with bank fraud and operating an unlicensed money-transmitting business. (Fowler had a detention hearing scheduled for May 2 in Arizona; an Israeli alleged co-conspirator remains at large.) Around the same time that Fowler was theoretically engaging in discussions about funding the new football league, authorities allege he was was also operating “shadow banking services” on behalf of a crypto currency exchange company that misrepresented money transfers and skirted international “anti-money laundering verification services.”

It was Fowler’s uncertain financial situation that led to the pledge of a $250 million investment in the AAF by Carolina Hurricanes owner Tom Dundon, who ultimately ended up laying a key role in the league being shuttered.

That agreement, consummated by phone — a shotgun wedding by all accounts — came at an immense cost to Ebersol, who stayed on as CEO but lost his voting seat on the board. (His father, Dick, was also removed.) Dundon would be the AAF’s new controlling owner, and it would show.

According to Yahoo! Finance…

Fowler has been arrested while Yosef remains at large. The pair worked for several related companies that provided fiat-currency banking services to various crypto exchanges.

They allegedly participated in a conspiracy in which Fowler made several numerous false and misleading statements, opening bank accounts that were used to receive deposits from individuals purchasing crypto. Fowler and Yosef also falsified electronic wire payment instructions to conceal the true nature of voluminous crypto exchange business.

Also this week, AAF parent company Legendary Field Exhibitions disclosed in a filing in bankruptcy court, “No property appears to be available to pay creditors. Therefore, please do not file a proof of claim now. If it later appears that assets are available to pay creditors, the clerk will send you another notice telling you that you may file a proof of claim and stating the deadline.”