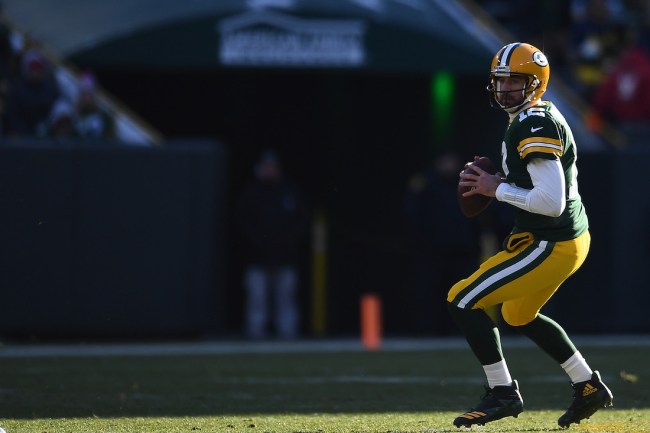 This whole Aaron Rodgers-Green Bay Packers drama has definitely had its fair share of twists and turns throughout this NFL offseason. From the reigning league MVP apparently being unhappy about his contract, to reports that he turned down a massive extension, to the player allegedly hoping to get the team’s GM fired, there’s no telling what might happen next in the NFL’s version of a can’t-miss soap opera.

While Rodgers’ former teammates have kept some optimism about seeing the quarterback return at some point this offseason, while others reportedly “in the know” have slammed the idea that the quarterback will ever play for the Packers again, the entire Green Bay fanbase is going through all the emotions. Like, do they root for their guy? Do they publicly start trashing him? There’s just so much uncertainty.

But this past weekend may have offered up some hope that Aaron Rodgers is thinking about sticking around and, presumably, playing for the Green Bay Packers again.

According to TheScore Wisconsin’s Twitter account, the quarterback has reportedly renewed his membership at the Green Bay Country Club through the end of this year. This is clearly the good news Packers fans have hoped for.

#Packers QB Aaron Rodgers has renewed his membership to Green Bay Country Club for the remainder of the year according to our sources. #NFL

Now, does this mean Aaron Rodgers is a Packer for life? Hell no! All it means is that he really likes the golf course at the Green Bay Country Club. Nothing more. Nothing less. But that didn’t stop people from rejoicing on Twitter following the recent report.

Exactly, so why would he play golf in GB if he's not playing football in GB.

I promise you there's nothing special about Wisconsin courses. Lol

Nope 😂😂 not even going to entertain that

Yeah, renewing an $8,000 membership for a guy with probably $150+ million in the bank means he’s returning to GB. 🙄 He has a place to play if he returns for business and is able to play with friends. It’s like me renewing my $10 Boston Magazine subscription after moving to LA.

Everyone in Green Bay rn: pic.twitter.com/j3n61DgsCO

This is all pretty ridiculous. But as somebody from Cleveland, had I heard rumors that LeBron James was doing this during his free agency in 2010 when he was weighing his options of returning to the Cavs or leaving — which he ultimately did with “The Decision” special — I would’ve been on cloud nine. Any news linking a superstar athlete to a city seems to bring good news… but not always.

Let’s not forget that both James and Rodgers are drama kings, and love all sorts of attention like this. They’re also passive aggressive AF, so don’t discount the idea that this whole country club renewal is something about nothing, and just the quarterback’s way of trolling both the organization and the fanbase into thinking it’s more than it is.

For all we know, this is Rodgers telling the entire Green Bay community that he’ll be sticking around… but it’ll be to focus more on his putting than on throwing touchdown passes. Plus, should the future Hall of Famer truly sit out or even retire this NFL offseason, he’ll have more time to hit the links. So, yeah, let’s pump the brakes a bit on the excitement with all of this.