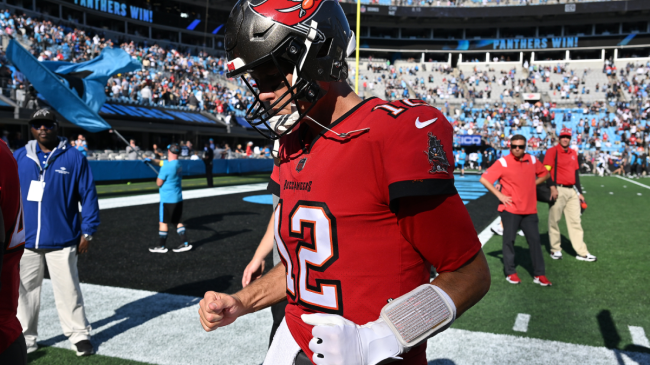 Tom Brady and the Bucs continued to struggle on Sunday, dropping an embarrassing game to the Carolina Panthers. Not only does the defeat give Tampa Bay a loss in divisional play, but it also puts the team below .500 as the midway point to the season nears.

And this was a game that the Bucs were expected to win with relative ease.

Brady and the Bucs managed just three points, failing to reach the endzone. Their best opportunity might’ve come on the opening drive, but Mike Evans dropped what would’ve been a sure score on a long pass. Things only got worse from there.

After the loss, many on social media took the opportunity to bash Brady. One of those haters happened to be an ex-teammate.

AB trolled Tom Brady after the defeat with a series of vicious tweets.

Brown, who played with Brady as a member of both the Bucs and Patriots, went on a Twitter rampage against Brady following the loss. Of course, it’s not the first time he’s done so.

AB made things personal earlier this season, insinuating that he’d had some sort of relationship with Brady’s soon-to-be ex-wife, Gisele Bundchen.

Brown’s first tweet was just a few bars directed at his former teammate and organization.

He then shot off a graphic of Brady’s head posted over a photo of AB’s dramatic departure from Tampa Bay.

Brown, though he’s said he wants to stay off the sports headlines, continuously takes shots at teams and players in the NFL. This is his latest jab at Brady, and if the Bucs’ poor play continues this season, it won’t be his last.