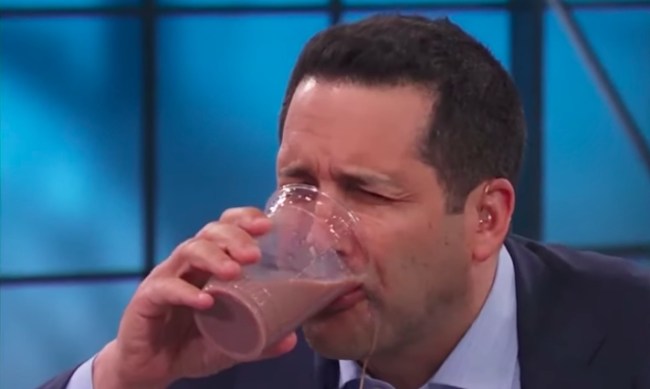 Social media has made it easier than ever to publicly shame someone, which is exactly what happened to Aaron Rodgers a couple of weeks ago when he showed off his dismal beer-chugging skills while rooting on the Bucks during the Eastern Conference Finals.

Rodgers was promptly shown up by Matthew Stafford but would eventually get the last laugh earlier this week when he threw some shade at the players who bested him in the best way possible.

Now, Rodgers can feel a lot better about any shortcomings he may have thanks to Adam Schefter.

On Wednesday, Schefter had his phone surgically removed from his hand so he could participate in a chug-off against Dan Orlovsky on NFL Live, and while the former quarterback managed to hold his own, Schefty decidedly did not.

It appears ESPN frowns upon its employees drinking at work, so the two men started off with a couple of cups of root beer and, well, I’ll just let you watch.

.@AdamSchefter is no match for Dan Orlovsky when it comes to chugging drinks 🤣 pic.twitter.com/1e9G774yt6

Following the fail, Schefter resorted to the “Oh, it was probably the tie” excuse before taking off his neckwear ahead of the chocolate milk challenge, which went equally poorly.

ESPN's NFL Live offered its own version of the Chug-Off QB challenge today. Even if this wasn't beer, @danorlovsky7 is clearly in the same class of Matthew Stafford and Mitchell Trubisky. 🍺 pic.twitter.com/Dcm6vTaz6d

The duo capped things off with some water, and as you can see, Schefter didn’t fare any better.

Adam Schefter might be the worst chugger of all time 😂 pic.twitter.com/4ny59E7Awn

If you’re so inclined, you can watch the full segment below.

I need Schefter and Darren Rovell to do this and I need it yesterday. Let’s make it happen, nerds.