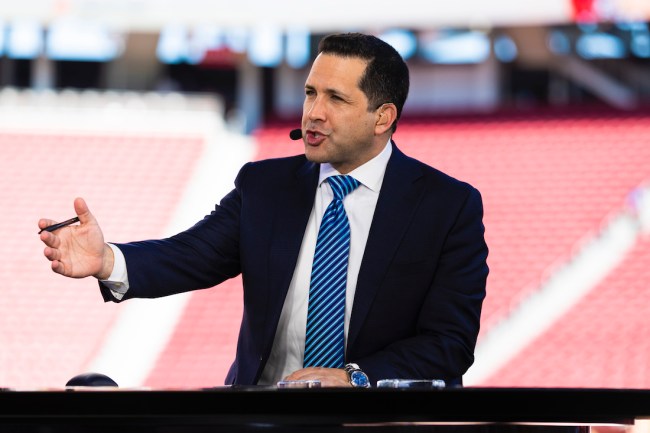 Not long ago, ESPN’s Adam Schefter predicted that as many as 18 quarterbacks could be changing teams this NFL offseason. At the time it seemed ludicrous. Then Matthew Stafford got traded for Jared Goff, Carson Wentz’s miserable contract got traded by the Eagles, and we still have to see how that whole Deshaun Watson drama with the Houston Texans turns out, so maybe Schefty’s idea isn’t as bizarre as it may have first seemed.

But because predicting is fun AF, Schefter decided to do something even more wild: Try to guess which quarterbacks will be going where this NFL offseason. Even crazier, he figured he might as well predict each NFL team’s starter by the time the season kicks off.

As you might expect, the results were… interesting. Just take a look at some of Adam Schefter’s guesses below, and see why your favorite team might be dead in the water before training camp even opens (Looking at you, Pats fans).

Now, look, the best part about being bold enough to toss out a prediction is that it’s nothing more than a guess. So unless Adam Schefter has legit money tied to any of those beliefs above — which I hope he doesn’t — there’s no harm in having some fun.

What’s most interesting on Schefter’s QB predictions above might be Watson on the Panthers — which is a rumor that’s been floating around — Justin Fields on the Texans, and Sam Darnold ended up with the Bears. Not sure how all of that happens, but, then again, did anybody foresee some of the mind-blowing moves that have already occurred this NFL offseason? Definitely not.

As for the NFL teams who are probably set under center, those are listed below. Again, those aren’t even etched in stone, and one could probably pluck out 2-3 franchises who could go searching for their next signal-caller (like the Browns, Vikings or Seahawks if things stay awkward with Russell Wilson).

The NFL offseason is always a roller coaster, and while Adam Schefter’s original guess of as many as 18 quarterbacks switching teams sounded bizarre, his predictions for which players will be starting where next season are even crazier. Then again, if even a couple of them happen, the dude will look like a damn genius.