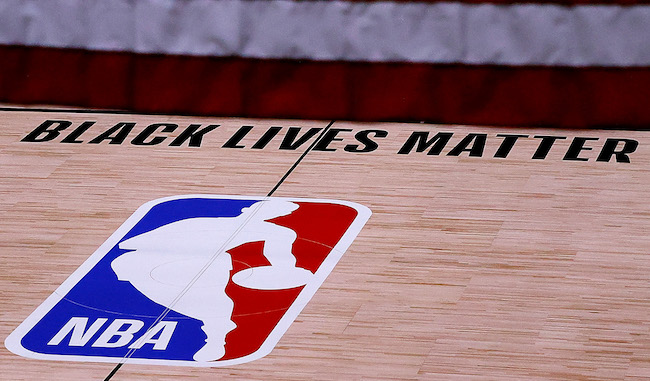 The NBA had to jump through more hoops than an acrobat at a Cirque du Soleil show when it came to figuring out a way to finish out the season it abruptly suspended in the middle of March, and after announcing its plans to resume play inside a bubble constructed at Walt Disney World Resorts, it encountered a new hurdle in light of the protests sparked in response to multiple high-profile incidents that led to people across America protesting to call attention to police brutality and racial equality toward the end of May.

It was during that time when a number of players voiced their concerns about confining themselves to the campus in Orlando with millions of people taking to the streets and some even considered not making the trek to Florida due to the optics involved.

After assessing the issue, commissioner Adam Silver announced the league would be taking steps to raise awareness with a primary focus on the “Black Lives Matter” movement, as those words were emblazoned on the sidelines—where many players took a knee during the national anthem— and some wore the phrase on the back of their jerseys (with other opting for the names of victims or other messages concerning social justice).

After play resumed, the Bucks would ultimately spark a spate of boycotts across multiple leagues when they refused to leave the locker room for a playoff game following the shooting of Jacob Blake and plenty of members of the “Shut Up And Dribble” movement were less than thrilled with pesky politics getting in the way of the sports they turn to for entertainment.

A lot of people ultimately pointed to this factor as the reason television ratings for the NBA Finals reached historic lows, including one unnamed agent who described it as a “horrible look for the league.” However, as he revealed in a recent interview with GQ, Silver would like to see some receipts to back up those claims, dismissing the notion that the Black Lives Matter messaging was the primary catalyst for a drop in viewership, saying:

“Now, some people might suggest that the words Black Lives Matter are causing massive amounts of people to tune out the NBA. There’s absolutely no data to support that.

And in fact, as I said, there’s no doubt there are some people—and whether or not they were truly our fans to begin with is unclear—who have become further engaged with the league because they believe in our players and they believe in the positions they’ve taken, even if they don’t agree with everything they say. They respect their right to speak out on issues that are important to them.”

Of course, there’s also no data to support Silver’s second claim, so do with that what you will. It’s also worth noting Silver has already said the league is planning on taking a less subtle approach whenever next season ends up kicking off, noting the messages that dotted the court will likely disappear but that the NBA will continue to pursue and support initiatives related to them.