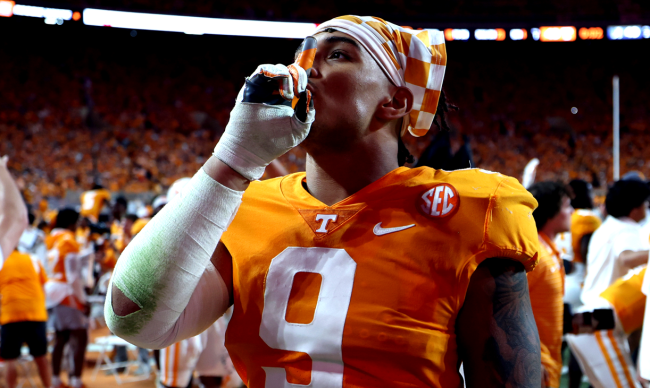 University of Alabama football fans have down bad ever since the Crimson Tide lost 52-49 to the University of Tennessee last Saturday.

After the Volunteers’ first win over Alabama after 15 years of losing, a whole lot of Bama fans basically lost their minds.

The wobbly game-winning kick from 40 yards out by Tennessee with time expiring immediately led some Alabama fans to become more than a little salty.

Some claimed the referees were celebrating Tennessee touchdowns because the officiating crews wanted to see the Crimson Tide fall.

One Alabama fan even lauded Jermaine Burton’s incident after the game in which he allegedly slapped a female Vols fan who ran on the field. He got fired from his job for his trouble.

The worst offender slash poor loser, however, a man from Florence, Alabama who was arrested Saturday night for allegedly shooting his neighbor’s house with a shotgun.

According to WAFF News, the fan was booked into the Lauderdale County Jail by the Florence Police Department after he allegedly got into a verbal argument with a neighbor about the game.

Following the argument, the Tide fan allegedly went home, grabbed his shotgun, and opened fire on his neighbor’s home.

According to the Florence Police Department, the man had been involved in an argument with his neighbor about the Alabama versus Tennessee game Saturday. https://t.co/VRDuuvKmqS

Luckily, no one inside the home was injured in the shooting.

The fan was arrested without incident, charged with discharging a firearm into an occupied building, and was released on a $30,000 bond.

The police did not state whether the neighbor was a Tennessee Volunteers’ fan or if he was just anti-Crimson Tide. (Maybe he was a Auburn fan?)

On the plus side, at least no one involved in the incident tore their ACL.

Forget the fundraiser for the missing goalposts, that guy is the one who is going to need some money to pay for medical bills following the big win.

The SEC… it just means more.