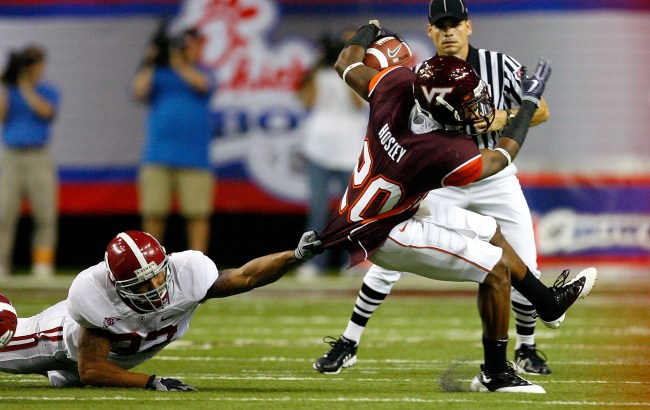 Peanut butter is to jelly as Bert is to Ernie as Drake is to bandwagon. The Canadian rapper has a long-storied history of front running for the overwhelming favorite, and more often than not, the team shits the bed. The most recent data point consists of Drake outwardly showing support for the Alabama Crimson Tide, who was pegged as a six-point favorite to beat Clemson in the National Championship.

The drake curse is real. Yo drake, you should wear some LA rams gear this week. Just sayin’ #CowboysNation #Drakecurse #CollegeFootballChampionship pic.twitter.com/HGXcD8ezSS

Alabama got whacked by the Tigers, 44-16, and as Bears’ kicker Cody Parkey knows all too well, every loser needs a scapegoat.

And the scapegoat shoulders the burden of the loss, made worse by the winner twisting the knife.

Someone get this man a shirt with a Tiger Paw quick pic.twitter.com/VDx2dD7Iv4

Im fighting him on sight pic.twitter.com/JqekahQChh

As TMZ reports, Anders is a superstitious cat and Drake is screwing the mojo.

“I don’t think there’s a bigger bandwagon fan out there than Drake himself,” he said. “I don’t know what it is but it seems like everything he touches with the exception of Max Holloway… Everything seems to come to a sudden halt and just crash and explode.”

“I really do got some heat for Drake right now.”

The Max Holloway reference is alluding to the UFC fighter Max Holloway, who Drake name dropped in 8 out of 10: ‘Max said they only blessed when they attached to you.’ Holloway would go on to become the featherweight champion.

If the #DrakeCurse continues, oddsmakers are going to start using the rappers fandom to set their lines.