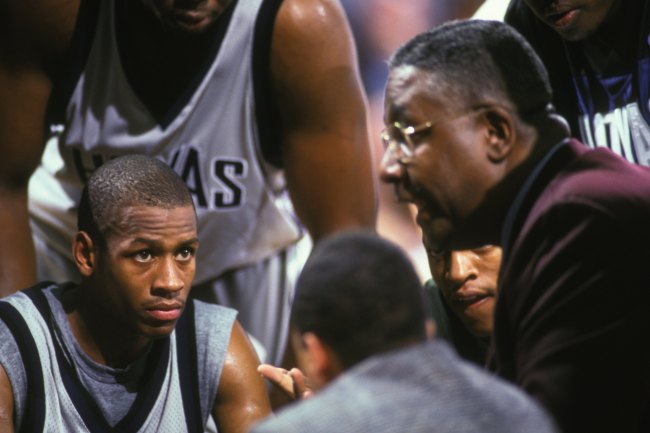 Basketball Hall of Famer Allen Iverson was one of the most lethal players to ever step foot on the hardwood. Although he was pint-sized, the dude had the heart and determination of a fucking giant, which is why he was so damn successful and an absolute killer with the ball in his hands. Hell, the guy crossed up Michael Jordan with no regard for human life as a rookie, so that goes to show the gall of “The Answer.”

However, prior to becoming the No. 1 pick in the famed 1996 NBA Draft, Allen Iverson had a bit of a reputation even before playing under John Thompson at Georgetown. While A.I. was nasty on the floor, he had some off-the-court issues in high school stemming from a bowling alley brawl, which resulted in some jail time for the soon-to-be superstar guard. It was at that moment that Iverson found a prominent figure in Thompson to help keep him on the straight and edge.

Following the passing of the legendary coach, who passed away on Monday morning, Iverson took to Instagram to pay tribute to John Thompson, even thanking him for saving his life during the difficult trials and tribulations the player battled as a reckless teenager. Take a look below at the heartfelt message.

Thanks For Saving My Life Coach. I’m going to miss you, but I’m sure that you are looking down on us with a big smile. I would give anything just for one more phone call from you only to hear you say, “Hey MF”, then we would talk about everything except basketball. May you always Rest in Paradise, where there is no pain or suffering. I will always see your face in my mind, hoping that I made you proud. “Your Prodigal Son”. #Hoya4Life

It’s wild to see the transformation that Allen Iverson has gone through over the past 25 years. The dude was considered a punk as a teenager with some baggage entering college at Georgetown, yet the prominent figure, John Thompson, never gave up on him, and helped shape A.I. into the man he is today.

So just how deep does the relationship run between the two? Iverson mentioned his love for Thompson during his Basketball Hall of Fame induction speech, describing how the head coach never gave up on the kid; despite his troubled past.

“My mom went to Georgetown and begged him to give me a chance, and he did. And that’s crazy to think that you’re the best football player in the world — which I did — and to be sitting up here as a Hall of Famer in basketball. You tell me God ain’t good.”

That’s a pretty special thing to have with somebody, and it’s clear how much Allen Iverson respected and loved John Thompson. RIP to the head coach.