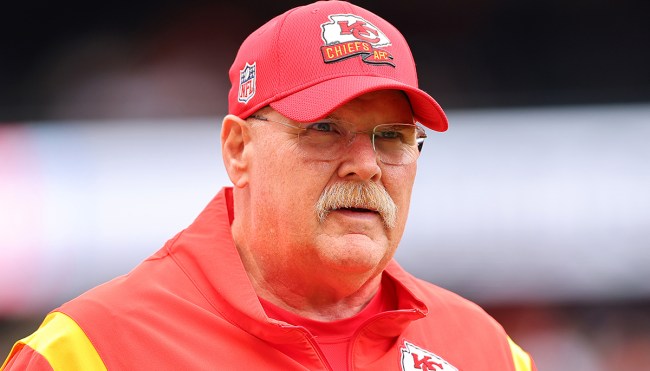 Based on everything we know about Andy Reid, I find it hard to believe there’s anyone on the planet who genuinely dislikes the man who currently patrols the sidelines for the Chiefs.

I guess I can understand why fans of certain teams who’ve found themselves on the losing end of a Kansas City victory might hold a slight grudge against the head coach. However, I don’t see how you can truly hate on a man whose personality seems to be one of the purest encapsulations of “what you see is what you get” that you’ll ever encounter.

There is perhaps no better way to sum up Reid’s personality than “A Guy Being A Dude”; The man’s love for football is only rivaled by his adoration for red meat, whether we’re talking about the massive steaks he’s able to put away at an impressive pace or the cheeseburgers he routinely relies on to congratulate himself for a job well done following a big win.

Of course, you can’t talk about Andy Reid without talking about his undying love for Tommy Bahama, which is largely manifested in the impressive variety of colorful shirts he’s donned after going into full Vacation Mode at the NFL’s annual league meeting.

Now, I can’t tell you if Reid packed any of those shirts with him when he took a trip to Italy with his “trophy wife” Tammy earlier this year (although all of the evidence at hand would suggest he’s the kind of guy who embraces the American Tourist aesthetic in another country by pairing one with a fanny pack and a pair of white tube socks).

However, I can tell you the legend of Andy Reid has only continued to grow courtesy of an anecdote from that trip that was relayed by Pro Football Talk’s Peter King on Monday

Reid is apparently not a big fan of wine or coffee, a revelation that understandably made one local wonder why someone who doesn’t have any interest in two integral aspects of Italian culture would want to visit the country in the first place.

However, the coach was able to clear up the confusion with an explanation that would make him the guest of honor at the dinner table of every Italian grandmother I’ve ever met:

Andy Reid and his wife, Tammy, took a vacation to Italy this offseason. When they got there, Andy Reid had a conversation with one of the locals at the start of the trip.

Local: “Coffee — what about coffee?”

Local: “YOU DON’T LIKE WINE OR COFFEE — WHAT ARE YOU DOING IN ITALY?”

The brand is stronger than ever.