Antonio Brown Was Never Going To Retire Because Of His Helmet, According To Antonio Brown 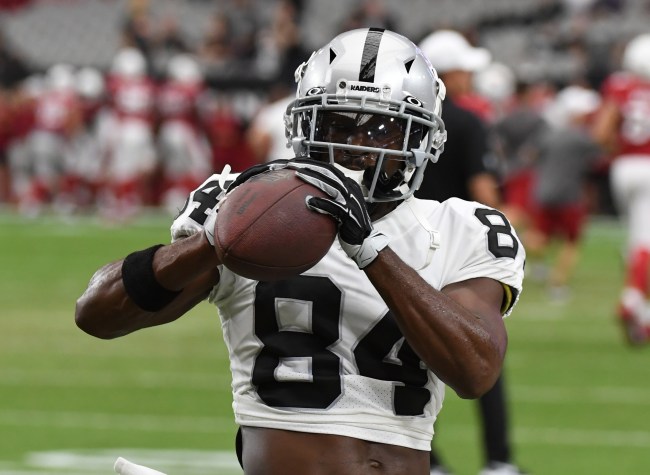 Antonio Brown’s had quite the eventful past couple of weeks. Not only did the All-Pro wideout get forced to the sideline after a freak frostbite accident totally F’ed up his feet following a cryotherapy session, but, out of nowhere, AB started complaining about his helmet, which he refused to replace with a new one — even though it was 10 years old and wasn’t approved by the NFL — and, reportedly, was talking about quitting football altogether.

We’ve all known that Antonio Brown is a prima donna who loves attention, but, c’mon, this shit was next level kind of stuff — but, fittingly, brought some intrigue to Hard Knocks, which the Raiders are featured on during training camp. And, while Hard Knocks may not be the real reason why Brown plotted all of this, it certainly could be a reason; because now he’s saying he never realistically considered retirement, which raised some eyebrows when it was first reported last week.

According to Michael Gehlken of the Dallas Morning News, Antonio Brown said he was shocked to hear about the retirement rumors, even going as far as saying he had no idea where those reports even began. Here’s what Gehlken tweeted out recently.

Antonio Brown on report he told Raiders he’d retire if he couldn’t play with preferred helmet: “I don’t know where they got that, who made that up, either. Why would I retire, man? I’ve got a beautiful career. I’m healthy. I love to play the game… I’m grateful to play the game”

Antonio Brown: Absolutely, I feel misunderstood. I’m not here to try to win people over or make people feel a certain way about me. I’m an athlete. I’m a human being. I’ve got tough skin. Just treat me like a human. Treat me w/ respect. But through it all, I’ve got a strong heart

Antonio Brown: "I hate when my mom called me, and my dad called. 'Retirement? Where'd you get that from?' I'm like, 'I never said that.' … If you guys could calm it down, man, it's really distracting my family. You guys gotta help me with all that stuff you guys put out there." pic.twitter.com/ELpzSzT3Ec

I’m not going to claim that Antonio Brown is crazy, because that’s just be mean, but, uh, does he not remember posting this video on Instagram last week claiming that he might just walk away from the NFL — which came in the middle of this whole Helmetgate thing that was going on?

Brown loves attention. He has to cause drama. He’s all about getting headlines, whether good or bad. So the fact that he played right into all of this by threatening to retire was absolutely something that he created. Why? We may never know the answer to that. But the fact that he claims he doesn’t know where it even started is laughable — because the narrative came from him.