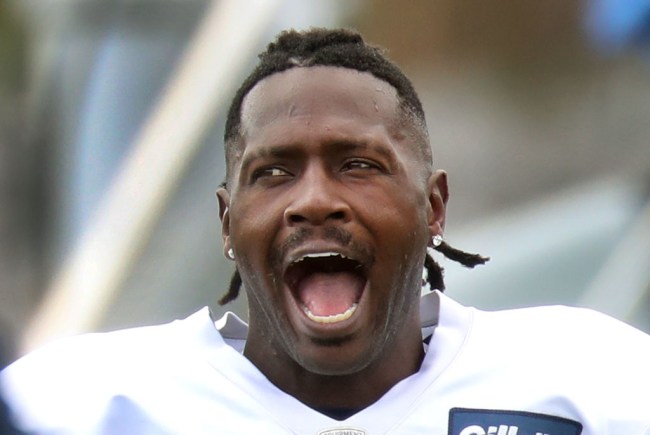 It’s been a little over a year since Antonio Brown sparked some drama during what would be his final season with the Steelers after getting into it with Ben Roethlisberger during an incident that would eventually lead to the wide receiver requesting a trade and launched one of the more notable sagas the NFL has seen in a while.

It would soon be revealed that Pittsburgh had been putting up with Brown’s shit for quite a while and his outburst would serve as the tipping point, as they soon began to explore their trade options as teams allowed the league lobbied to get their hands on the superstar.

In March, it was reported that the Steelers had come to terms with the Bills before Brown nixed the trade, and while the Patriots reportedly made a lucrative offer, the franchise declined to give Tom Brady a stellar offensive weapon and opted to send him to the Raiders in a lopsided trade that couldn’t get approved in Madden.

Brown had a chance to start with a fresh slate but found himself being a distraction yet again when he threw a temper tantrum after being informed he’d have to play with a different helmet than the one he used during his time in Pittsburgh. He soon found himself at odds with GM Mike Mayock, who released him after deciding he was more trouble than he was worth.

The Patriots jumped at the opportunity they were previously denied and he played exactly one game after signing with the team before he was released yet again after becoming embroiled in a new scandal stemming from the multiple women who accused him of sexual misconduct.

Since then, Brown has spent a solid chunk of his time stirring the pot on social media and working on his music career while making it clear he wants to return to football, and while it’s unclear if he’s even allowed to play, the Saints still brought him in for a workout that ultimately led to nothing (much to his displeasure).

The Steelers went into the final week of the regular season with a shot at a playoff berth but were ultimately unsuccessful in their quest. However, the other four teams Brown has been connected to in the past year all played over the weekend and every single one of them proceeded to get eliminated by the time all of the contests were wrapped up.

Brown danced on the Patriots’ grave on Twitter following their loss on Saturday before he deleted a message that was thankfully screenshotted for posterity.

He deleted this but boy when I tell you I am still laughing my ass off 💀💀💀💀 pic.twitter.com/aUNVVRxeZM

On Sunday, someone noted he’d appeared to have cursed all of the aforementioned teams and he sent out another tweet to ensure the world noticed.

AB is truly the gift that keeps on giving.