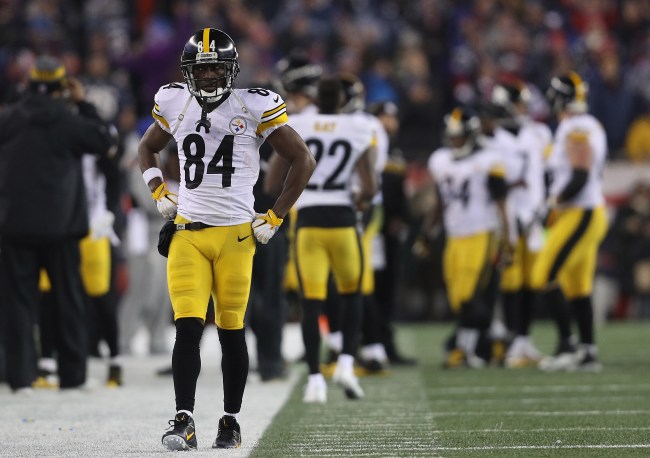 Antonio Brown continues his bizarre behavior in the midst of trade rumors, as the disgruntled Pittsburgh Steelers wide receiver took to his Instagram account to share a live video with his fans that hinted at him revealing his new team soon. Uh, OK, but his new team isn’t really his choice, as the Steelers hold all the cards in where the All-Pro wideout goes, so this has me wondering what in the hell Antonio Brown’s even talking about.

Take a look at the Antonio Brown video from Instagram today, which was captured and tweeted out by Dov Kleiman, and independent football reporter.

With someone yelling in the background, “he’s already got on his black and gray,” it’s presumed that Brown’s hinting at joining the Oakland Raiders — who have been rumored to be the favorites to land him. But Brown has also posted photoshopped pictures of himself wearing a San Francisco 49ers uniform, so take everything with a grain of salt from this guy.

Field Yates did transcribe everything Antonio Brown said in the video, though, so here you go.

As most of us know by now, the news that Antonio Brown was traded to the Buffalo Bills last night was as fake as it got. It led to a number of fans going in on NFL Network’s Ian Rapoport for reporting the deal was agreed upon when, in fact, it later came out that the Bills and Steelers did engage in talks, but, ultimately, they died. One of the main reasons could’ve been Antonio Brown, reportedly, saying he wouldn’t report to Buffalo had he been traded there, which led to a whole bunch of debauchery in terms of where he might actually land.

During this entire process, Antonio Brown has talked about his desire to be traded to the San Francisco 49ers, but, unfortunately, he doesn’t have a say in the deal the Steelers decide. So the above video is a little strange.

Who knows if Antonio Brown does, in fact, have anything big to announce soon or if he’s just doing more things to bring attention to himself. Guess we’ll all just have to wait and see if the prima donna wide receiver takes to social media again to reveal his new franchise — which probably isn’t something the Steelers would want him to do before announcing a deal first. But, hey, whatever.