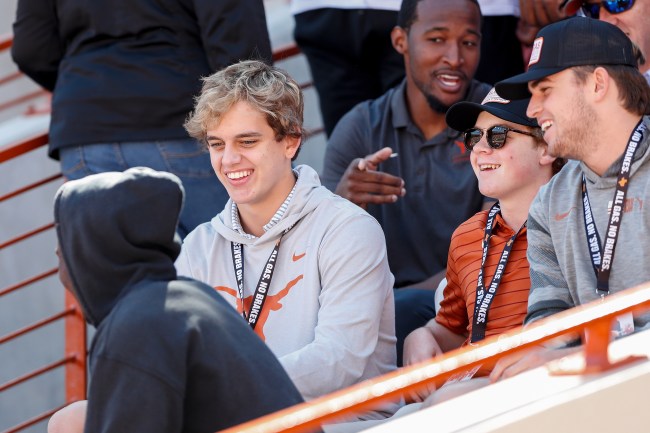 Arch Manning’s commitment is still more than a year away, should he choose to wait until National Signing Day. However, the picture is continuing to take shape.

Earlier this year, the Class of 2023 No. 1 overall recruit visited Georgia and reportedly liked what he saw, and Clemson was reportedly impressive. He has also been heavily recruited by Texas, but the recent commitment from Quinn Ewers could potentially muddy those waters. Manning says otherwise, but it could.

And then, of course, Ole Miss is also in the mix. As the alma mater of his uncle Eli, head coach Lane Kiffin has made his pitch to Manning on multiple occasions and a leaked video from earlier this year showed Manning commit to the Rebels— though it was pretty clearly a joke.

There are a lot of factors in play and a lot of time for Manning to figure it out. In the meantime, he is balling out on the hardwood and will compete in track and field when basketball season is over.

As of right now, Manning does not have any visits scheduled for the spring. But per a recent report from On3’s Justin Wells, that is likely set to change.

A few new suitors have entered the conversation and one of his top schools is pushing hard.

Texas quarterback coach A.J. Milwee recently spoke with Manning about the idea of playing in Austin. As a part of the conversation, he reportedly made a push to get the 6-foot-4, 215-pounder on campus later this month.

The Longhorns are set to host their ‘Junior Day’ on January 22nd. Milwee, head coach Steve Sarkisian, and the rest of the Texas staff want Manning to join them.

There is only one potential snag in the plan. Manning’s high school basketball team, Isidore Newman, has a home game at 7:00pm the night before.

Instead, according to Wells, Manning is looking to lineup some visits that correlate with spring practices. That way he could get a feel for how the programs operate “in-season” and could potentially sit-in on some meetings.

In addition, Manning has received some new suitors.

Over the last few weeks, Michigan, Stanford and Oklahoma have extended offers. All three schools would love to get him on campus, of course.

Jim Harbaugh and David Shaw are reportedly leading the charge for the Wolverines and Cardinal. For the Sooners, former Ole Miss offensive coordinator Jeff Lebby — who was heavily involved in Manning’s visits to Oxford — is taking the reins.

There is no timeline or deadline set for the recruitment of the nation’s top prospect. He has until Wednesday, February 1, 2023 to sign his National Letter of Intent and both he and his family plan to be patient, diligent and professional.