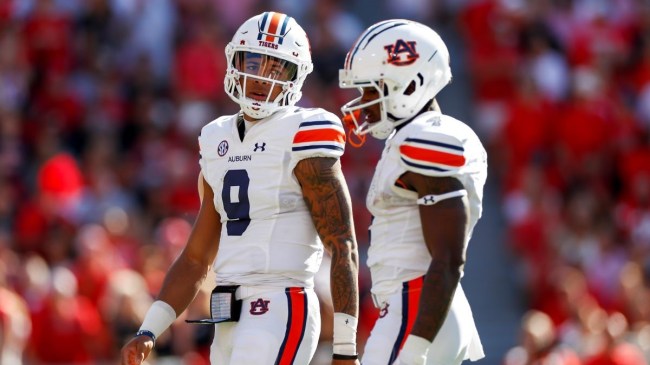 Another week of college football means another week of bad news coming out of the Auburn Tigers’ program. Auburn has been on the brink of disaster dating back to the end of the 2021 season. Head coach Bryan Harsin was nearly forced out in the offseason after an internal investigation. He then entered the new season under the microscope.

Things haven’t gotten any better for Harsin or the Tigers in 2022, however. Auburn currently sits at 3-3 and fans are still calling for Harsin’s head. Those calls got particularly loud after a blowout home loss to Penn State in Week 3. Only a chip-shot field goal miss by one of the nation’s top kickers stands between Harsin and joblessness.

But the Tigers still have six games, plus a potential bowl, to turn things around in 2022. That six-game stretch won’t be easy though. It began Saturday against undefeated, ninth-ranked Ole Miss. The Rebels and head coach Lane Kiffin showed no mercy.

Ole Miss raced out to a 21-0 lead, much to the delight of the crowd at Vaught-Hemingway Stadium. But the Tigers didn’t completely roll over. They marched down the field for a nine-play, 75-yard touchdown drive capped by 2-yard run by quarterback Robby Ashford to cut the lead to 21-7.

But star running back Tank Bigsby still didn’t seem too happy with his team or its performance.

Robby Ashford And Tank Bigsby Get In Fight On Auburn Sideline

Following the touchdown drive, Bigsby had an exchange of words with Ashford and the two had to be separated by Auburn staff members.

Even after Auburn scores a TD, ESPN cameras pick up Robby Ashford and Tank Bigsby getting into it on the sidelines. pic.twitter.com/6Fww5T7FCy

ESPN’s sideline reporter said that Ashford repeatedly told Bigsby “don’t give up on me.”

Whatever was said seemed to work, at least momentarily. Auburn forced a 3-and-out on defense and then went 76 yards in eight plays, capped by a Bigsby touchdown to cut the lead to 21-14.

The Rebels currently lead 28-17 at the half.