Baker Mayfield Doubles Down On Beef With Hue Jackson, Admits He Wanted ‘Revenge’ Against Former Coach 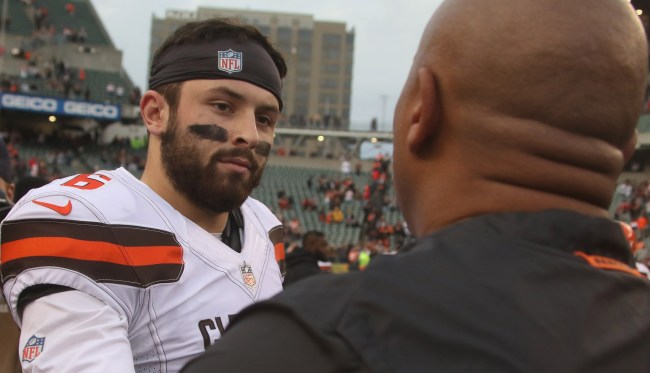 One thing is for sure, win or lose, Cleveland Browns quarterback Baker Mayfield is not going to shy away from speaking his mind.

Whether he’s taking shots at his rival school’s quarterback or getting into it with people like radio host Colin Cowherd, Mayfield has is certainly no shrinking violet.

One of the stories that Mayfield ignited that won’t seem to go away has to do with his icy relationship with his former coach in Cleveland, Hue Jackson.

When Jackson was fired by the Browns (and laugably called his 3-36-1 record some of the best coaching he’s ever done), he almost imediately took a job on Marvin Lewis’ staff with the division rival Bengals as a “special assistant.”

This did not sit well with the Browns’ franchise QB and so when Mayfield led Cleveland to a win over Cincinnati he made it very clear he had little time for his former coach.

In the second Browns-Bengals game after Jackson’s departure, Mayfield once again showed his obvious disdain for Jackson.

Mayfield caught some criticism for calling Jackson “fake” by some in the media, but that hasn’t stopped him from sticking to his guns as he doubled-down on his take in a new interview with Mina Kimes of ESPN.

“I said what I meant,” he says. “Don’t stand up in front of us the week before and try to tell us you’re doing everything for us, then go take a job with a team we play twice a year. It was one of those honesty and respect things.” The quarterback says he didn’t mind the blowback, though it did bother him when people said he was disregarding Jackson’s need to earn a living, given that his former coach was still getting paid by the Browns. I ask him if he relished beating the Bengals last season. “Absolutely,” he says. “I’m not gonna lie to you and say that the first time I played Hue did not feel good. It’s human nature to want to get revenge.”

Kimes also asked Jackson what he thought of all the animosity Mayfield has for him and replied, “Baker’s gonna be Baker. He was disappointed that I left and was with a team in the division. … That was his feeling and I have to respect it.”

Well, Jackson is right about one thing. Baker is most definitely gonna be Baker.