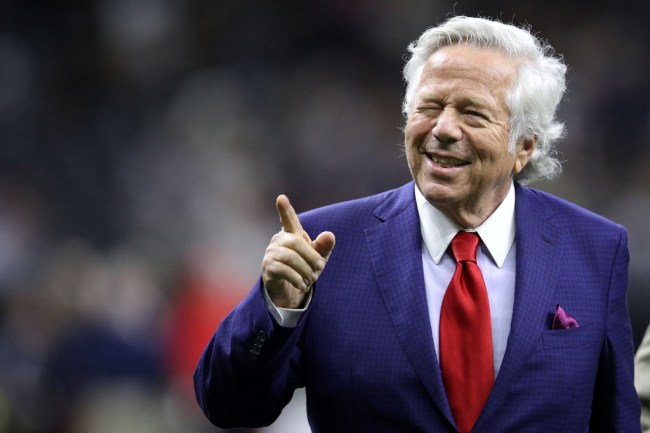 I’ll likely never be in a position to know for sure, but I’ve always felt that when your net worth reaches a point where the internet feels justified in canceling you for complaining about how hard it’s been to isolate yourself in the multimillion-dollar mansion you own, you’re no longer in a position where you need to pay for people to do pleasurable things to your private parts.

It’s one thing if you want to have an emotional connection with whoever is getting physical with you, but if you’re just looking for a casual hookup, it’s not that hard to make a Tinder profile with pictures shamelessly flaunting your wealth or have a champagne bottle with sparklers attract thirsty people to your table in the V.I.P. section of a nightclub like moths to a flame.

However, I guess sometimes it’s just easier to treat sex like the business transactions that made you rich in the first place, and as a result, plenty of high-profile figures have found themselves at the center of prostitution scandals over the years, including Hugh Grant, Wayne Rooney, and a solid chunk of the guys on the Minnesota Vikings roster in 2005.

Many of these incidents require me to use the word “alleged” to describe them in order to avoid getting hit with a lawsuit—including the case of Robert Kraft, the New England Patriots owner with a very nice estimated net worth of $6.9 billion who was arrested last year after being caught up in a police sting at a Florida spa offering services that are generally frowned upon by law enforcement.

Kraft pled not guilty to the charges and has used some of his billions to hire an army of lawyers who have prevented video of the sex acts from being released while prosecutors push for a pretty severe punishment in a case that’s unlikely to be resolved at any point in the near future.

Kraft has stayed largely silent on the matter, and after failing to convince Tom Brady to remain with the Patriots, he’s turned his attention to the upcoming season, a topic he addressed with Sean Hannity on Tuesday. During the conversation, Kraft appeared to be optimistic about games being played in the fall and said he’s been active in helping develop a protocol that will ensure a safe environment for everyone involved.

The Baltimore Sun covered Kraft’s comments, and on Thursday, the newspaper tweeted out the story and opted to use the words “happy ending” to describe how Kraft hopes things will eventually play out. 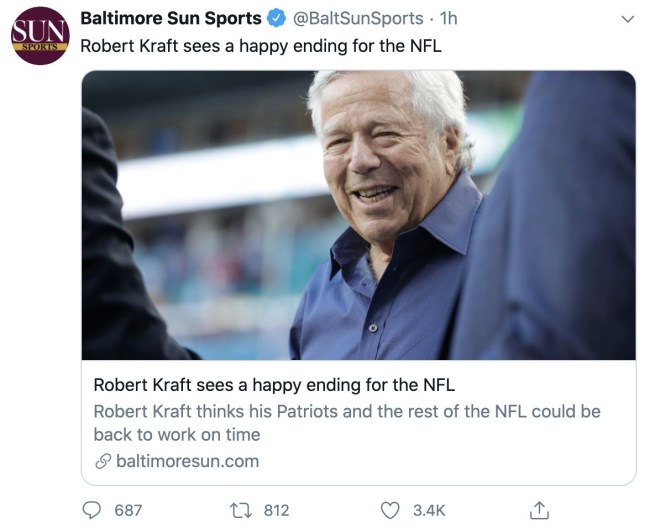 While I would have normally embedded the tweet there, I had to resort to a screenshot because even though the outlet was flooded with responses complimenting them for an objectively phenomenal headline, it eventually removed the tweet and edited the phrasing thanks to its pesky journalistic standards.

Patriots owner Robert Kraft thinks the NFL season will start on schedule. (We deleted a previous tweet to this story that used a headline that did not meet our editorial standards). https://t.co/ePpdZqYIhI

What a damn shame.