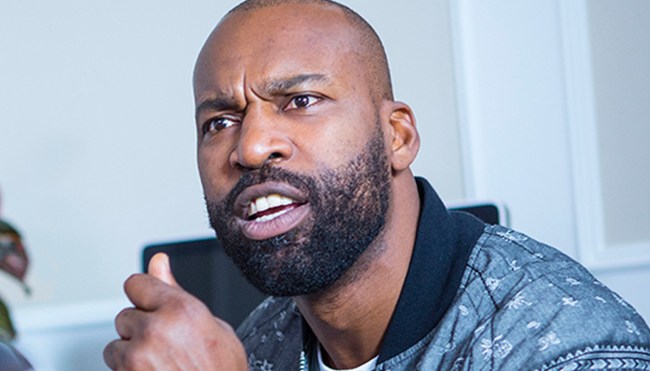 The culinary world is littered with snobby gatekeepers who need to tell people they’re eating food the “wrong” way like the rest of us need air to breathe, and I normally try to avoid judging others for certain habits that are commonly frowned upon.

Do you want to eat a steak well-done? Think pineapple belongs on pizza? Share Dale Earnhardt Jr.’s affinity for revolting sandwiches? Those things might not be for me, but if you genuinely enjoy them, I’m not going to stop you from doing you.

With that said, there is one particularly popular food crime that makes me draw the line; one’s that frequently perpetrated by people who insist on putting ketchup on virtually everything they eat.

Patrick Mahomes is arguably the most prolific and high-profile offender (he even scored an endorsement deal from Hunt’s for putting the condiment on his steak), but he’s apparently not the only athlete who insists upon throwing ketchup on foods it should never grace.

In 2017, Marcellus Wiley turned plenty of heads when he posted a picture of 10 tacos overflowing with the hefty amount of ketchup he squirted on top of each one.

Look at these beauties my wife whipped up to celebrate me coming back home! After 6 months of being Vegan, Vegetarian, & Pescatarian 🤨I’m baaaaack! Look at these 10 chicken tacos w/ketchup on them! 😛 #noketchupnotataco #gottiredofallthemcarbs #wasnthardtho pic.twitter.com/USLedRhUSX

Based on the backlash that photo received, you’d think other people would learn from his mistake, but that didn’t stop former NBA player Baron Davis from willingly admitting to doing the same earlier this week.

It didn’t take long for plenty of people to voice their displeasure with that decision.

Moved down in my all time rankings sadly https://t.co/KuftL5KCui

You from LA, you know better

Who the fuck hurt you? https://t.co/be5BufyZB4

This should be a misdemeanor https://t.co/Tu2ZyhMxpi

No sir, can’t allow that.

Replay will confirm this a Flagrant 3 pic.twitter.com/XgFUU3amZu

free will was a mistake https://t.co/DMPsSvhe17

You truly hate to see it.