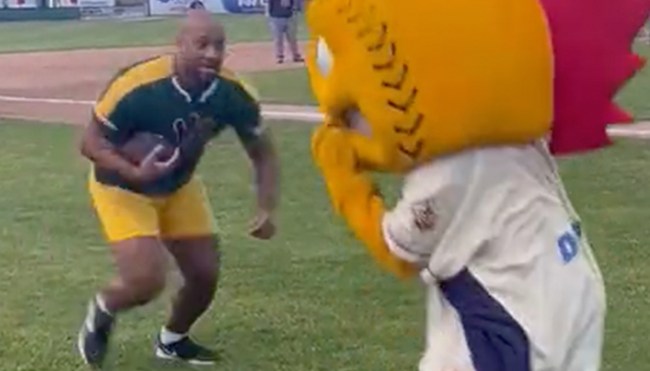 The NFL is filled with some impossibly large human beings, so it takes a lot to be able to stand out among an absolutely monstrous crowd. However, AJ Dillon has been able to do exactly that since being drafted by the Green Bay Packers in 2020.

The Boston College product only needed three seasons to set the program’s all-time rushing record thanks in no small part to the massive legs that earned him the nickname “Quadzilla” and made life a living hell for defenders who routinely had trouble stopping him from gaining at least a couple of extra yards after contact (if they managed to bring him down at all).

Most people who are unlucky enough to find themselves in the path of the 6’0″, 250 lb wrecking ball are wearing pads and a helmet to absorb the blow. However, that wasn’t the case for the minor league baseball mascot who found himself at the center of a viral video after Dillon hit him with the truck stick when the two of them faced off in an Oklahoma drill at the Kenosha Kingfish’s Legends Celebrity Softball Game over the weekend.

The Athletic managed to track down the man inside the costume and get some insight from Trey Meier, the 5’9, 150 lb member of the University of Wisconsin-Milwaukee cross country team who gets paid $12.50 an hour to entertain fans as Elvis the Kingfish when he’s not getting destroyed by an NFL running back.

Meier said he didn’t learn he’d be facing off against Dillon until he arrived at the field, and proved he’s the consummate mascot when he revealed his biggest regret had nothing to do with the physical repercussions, saying:

“The one thing that I was worried about when I got hit, I was like, ‘I’ve got to get my head back on.’

I got the wind knocked out of me a little bit, but I got up right away. I got my head back on, and I’d say that’s the only thing I regret, my head coming off, because there are now a couple kids in the stands who just saw Elvis without a head.”

That right there is the mark of a true professional.