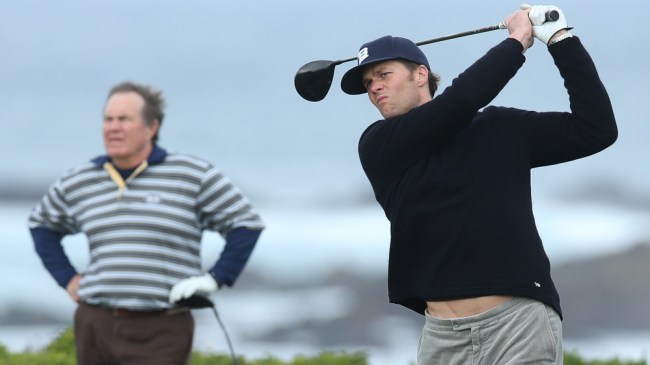 New England Patriots quarterback Tom Brady is not like most people. In fact, he’s not like just about anyone. He’s one of the most successful football players in NFL history. He’s married to one of the greatest supermodels of all time. He’s got some very, uh, unique, ideas about diet and physical fitness. He has an odd sense of fashion. And he’s more than a little bit socially awkward.

A big part of the reason for ALL of that is the fact that Brady is so laser-focused in wanting to be successful, regardless of what he’s doing (or who it is against – hide the women and children).

This single-mindedness was never more evident than in this story Bill Belichick shared on Ian Rapaport’s podcast about the time Brady risked life and limb to make a meaningless shot at a Pebble Beach Pro-Am.

This story from Bill Belichick on @RapSheet's podcast about Tom Brady hanging over a cliff so he could hit a shot in a Pro-Am golf tournament may be the funniest thing I've ever heard.https://t.co/OhR6F1y4JI pic.twitter.com/gVqdM8IxIR

“One story I think really sums it up for Tom is when we playing at the Pebble Beach Pro-Am, we were in the same group. And we were on the sixth hole, which is a long par-5 and it goes up a big hill and the ocean is on the right, and the fairway kind of falls off to the right, and most of us golfers are little slicers anyways, so lot of balls end up over there — in or by the ocean. So there we are playing in a pro-am tournament, where, as an amateur if you hit a bad shot you don’t really worry about it, you play the pro’s ball anyways, that’s what you have him for. There’s not a ton of pressure on the amateurs because you have a good player with you who probably is going to make a par on almost every hole and birdie a few.

“So Tom hit one, his second shot, over (to the right), and I see a starting quarterback, a Super Bowl MVP, a league MVP literally hanging over the side of the cliff probably 200-300 feet above the ocean trying to hit a golf ball that’s a pretty meaningless shot because the pro already is going to do better than he would on the hole.

“But that’s Tom, he’s very, very competitive, very focused. Plays kind of fearlessly, whether it’s on—in this case on the golf course—or on the football field. But I was just thinking to myself, ‘This is a crazy sight that I’m looking at here.’

“So he hit the ball and then his caddie kind of walked over there and gave him a hand and helped him back up this cliff that he was a few feet down on, or below. So I certainly breathed a little bit easier when he came up for air on that one. But yeah, when I think of Tom, I think of situations like that. It doesn’t really matter, but to him it matters and he only knows one way to do it and that’s the way he’s going to do it.”