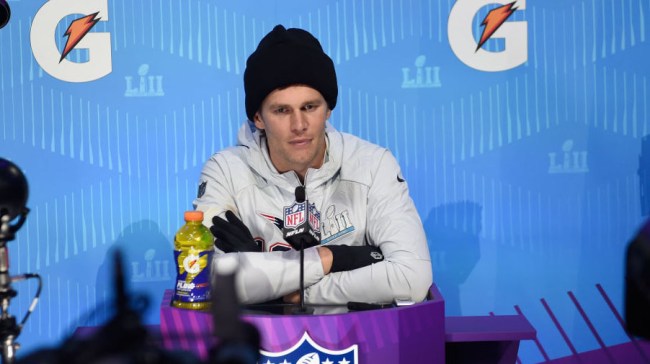 In addition to being quizzed on what things could possibly make Bill Belichick smile (he came up with four) and telling stories about a bad experience with chewing tobacco, Tom Brady was also asked several pop culture questions by Extra at Super Bowl Media Day. He had no clue what they were talking about.

The questions ranged everywhere from which actors are nominated for an Oscar this year to the name of Kim Kardashian and Kanye West’s latest kid.

When asked to name four actors nominated for an Oscar, he replied, “I have no idea.”

Brady also didn’t know who was hosting the Oscars or the name of Kimye’s baby girl. He joked, “Extra is Hollywood-focused?”

The questions did get a little easier for the champion quarterback. When asked who Aaron Rodgers was dating, he was able to name Danica Patrick.

Tom was also able to name his teammate Danny Amendola’s girlfriend, saying, “I know that one.” He continued, “Olivia Culpo. She’s a very sweet girl and they make a great couple.”

Of course he could name Danica Patrick. She’s been busting her butt making sure everyone knows (much to her ex-boyfriend’s chagrin). And as for Olivia Culpo dating Danny Amendola, he’d better know that.

Brady also couldn’t name any characters on Game of Thrones, had no idea who was hosting this year’s Oscars (I don’t either), and didn’t know who starred in The Longest Yard until someone shouted out Adam Sandler, to which Brady responded, “I love Adam Sandler, even though he’s a Jet fan. He’s a great guy.” (Jesus wept. And Burt Reynolds.)

He was also asked about the hit show This Is Us and looked like a deer caught in headlights. Apparently his kids also aren’t watching much TV because, as Tom put it, “Their mom is pretty tough with electronic time with them.”