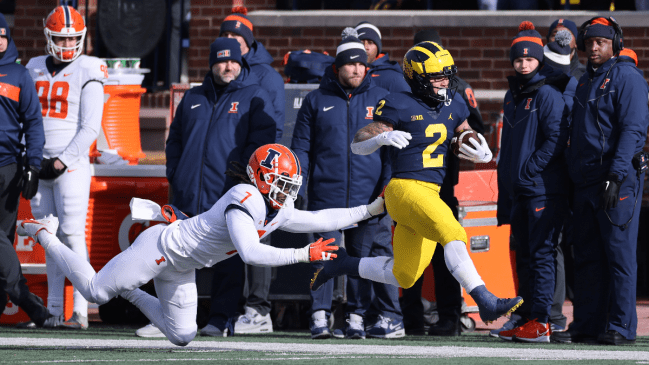 The Wolverines began the year licking their wounds after being upset by the TCU Horned Frogs in the College Football Playoff semifinals.

Michigan fans then spent the next week worrying about the job status of head coach Jim Harbaugh. Harbaugh led Michigan to a 25-3 record over the past two seasons. But reports state that he may now be eyeing a return to the NFL with the Carolina Panthers.

Beyond that, Harbaugh and the Wolverines are currently under investigation by the NCAA for alleged recruiting violations.

So yeah, things have been tough for the fellas (and lady fellas) over in Ann Arbor. Thankfully, they got a bit of good news on Monday.

The Wolverines’ perfect run through the Big Ten and to the College Football Playoff was built largely on the back of an elite run game.

More specifically, on the back of superstar running back Blake Corum. Corum rushed 1,463 yards and 18 touchdowns on the year. But he missed the final two games the season, as well as the majority of Michigan’s win over Ohio State, due to a knee injury suffered in a win over Illinois.

Corum had surgery to repair the knee injury in early December and most believed he’d played his final college game. But not so fast!

Corum shocked college football fans on Thursday when he announced his intent to forgo the 2023 NFL Draft and return to Michigan for his senior season.

“Motivated by my profound love for Michigan and commitment to my education, I have decided to return for another season,” said in statement released on Twitter.

BOOM: Blake Corum is returning to #Michigan. Says he “has unfinished business.”

The Wolverines will arguably have the best one-two punch in the nation running the football next season with Corum and Donovan Edwards.

Corum’s return gives the Wolverines one of the nation’s most formidable backfields in 2023 and makes them a playoff threat yet again.

He joins Utah’s Cam Rising as college football stars to announce their intent to return in 2023 on Monday.