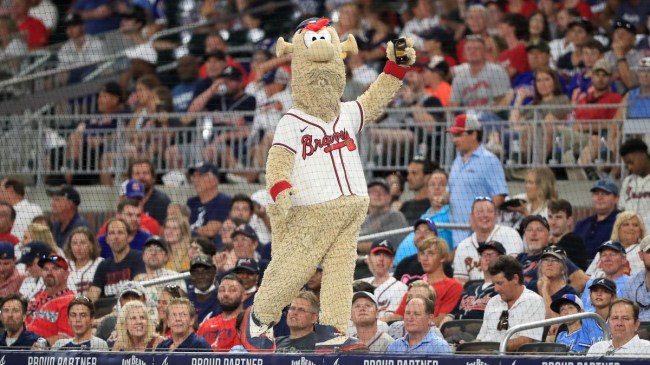 Who knows, maybe Brook and Robin Lopez know something that the rest of us don’t.

A little while back, a video emerged of Colts mascot Blue absolutely dominating in a football game against small children. The video went viral and Blue turned into an instant legend.

Now it appears we’ve got the sequel to that video.

The Indianapolis Colts, ironically, put a beat down on the Minnesota Vikings in the first half of their contest on Saturday. Indianapolis took a stunning 33-0 lead into the break. Now, most fans in Minnesota would be inclined to leave at the half. Maybe beat some traffic or grab some Culver’s on the way home.

But the smart fans stayed for the halftime entertainment, which yet again featured small children trying to play football against mascots. And, yet again, it turned out poorly for the silly children.

BLOOPER IS A MENACE pic.twitter.com/s1wMqAgBrk

This time, it was Atlanta Braves mascot Blooper who did his best Derrick Henry impression. When one small child attempted to come up and make a form tackle on the gigantic fluffy mascot, Blooper hit him with a stiff arm that made him rethink every life choice that led him to that moment.

And honestly, it’s hard to blame him. A year ago, Blooper was on top of the world. The Braves won the World Series and everybody loved him. This year, the Braves went out sad to the Philadelphia Phillies in the NLDS after a 101-win season. Add to that the fact that star shortstop Dansby Swanson is on the way out and Blooper probably had a lot of pent-up aggression.

Nothing makes me more American than the Mascot vs Kids football halftime https://t.co/g03yOjlpbo

Gave that boy the gift of flight. Blooper is for the children. https://t.co/VGnhmXzf8n