Brad Stevens Has A Chance To Make History By Hiring Becky Hammond, Backing Up His Hope For Female NBA Head Coach 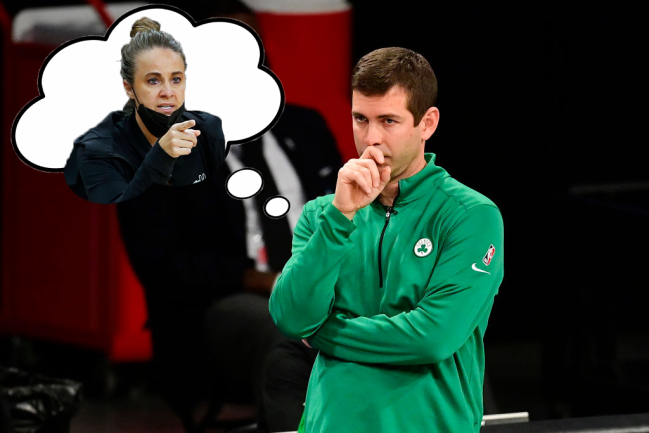 Brad Stevens is out as the head coach of the Boston Celtics, but he will be directly involved with hiring his replacement. The 44-year-old was promoted to Director of Basketball Operations on Wednesday after Danny Ainge stepped down. This move comes less than 24 hours after a disappointing 4-1 playoff series loss to end a disappointing .500 season.

Naturally, the rumors are running wild.

Some reports say that the search will begin internally.

The Celtics are expected to interview internal candidates for the head coaching job in the coming days before eventually looking outside the organization, sources tell @SInow.

Should that be the case, Jay Larranaga is the most likely internal candidate. He has been a longtime assistant with the team and was actually interviewed to replace Doc Rivers before the team tapped Stevens.

Others say that Jason Kidd and Lloyd Pierce are among the top candidates.

Pierce and Kidd, arguably two of the worst candidates on the market, have had their names circulate. With that being said, the list is believed to extend beyond the two.

Is history in the making?

Because Stevens will play a big part in hiring his own replacement, there is one particular name to watch. Becky Hammon has been atop of the list of rising assistants who are eyeing a head coaching job for a few years. She is currently the Spurs’ second in command, a Gregg Popovich protégé, and has filled in for Popovich before.

Hammon, also 44, has received high praise from Stevens. Stevens hopes to see the first female head coach “very soon” and has a chance to back up his talk with the upcoming hire. Hammon will become the NBA’s first full-time female head coach if hired.

When Stevens commented on Hammon in April, it’s hard to imagine that he knew what was soon to happen. It will be curious to see if he backs up his words.