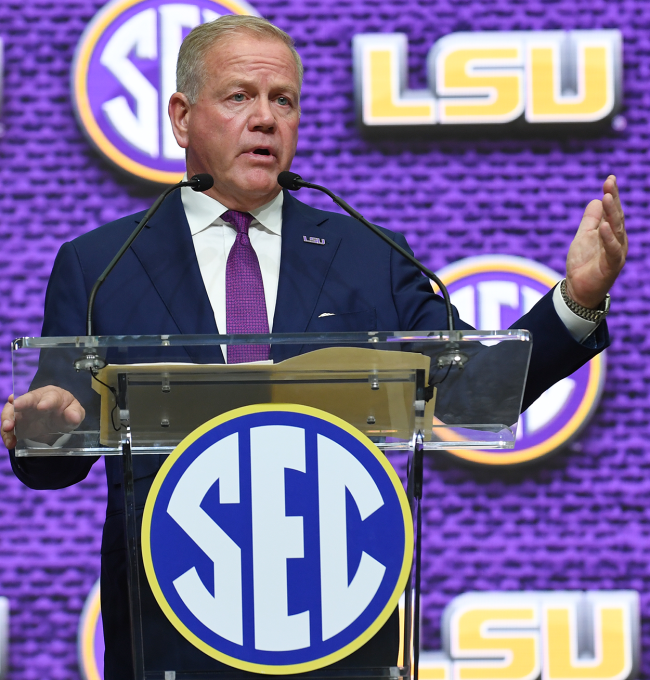 Brian Kelly’s media session on the first day of his first fall camp at LSU did not get off to the start that he wanted. As a result, he got snappy.

Kelly, who was hired away from Notre Dame in a shocking offseason move, has had quite the first year in Baton Rouge and it has barely even begun. He has gone viral on multiple occasions for dancing on TikTok, was caught slipping into a fake southern accent, made himself look like a hypocrite over NIL, got trolled by SEC Network and may have exposed his burner account.

Although it has been a bizarre first few months, Kelly is recruiting well. In addition, there is hope that the Tigers will be legitimate contenders in the SEC.

The success has yet to be seen, but there has not been a lack of content coming out of LSU football. Friday was no exception.

After wrapping the first day of fall camp, Kelly walked into the media room to address reporters. As he stepped up to the microphone, he welcomed everybody back and went to take a sip of his water.

However, after not a single word was said in response, he quickly put down his water bottle and got very sassy with the media members in the room.

With some serious tone in his voice and an angry look on his face, Kelly reiterated his welcome. He then proceeded to make a very sharp-tongued comment about how things are going to go with the media this fall.

Brian Kelly setting the tone on the first day 😂

It’s going to be a very interesting year at LSU. Kelly certainly set the tone on Day 1 for how things will go this fall, and not necessarily in a good way.