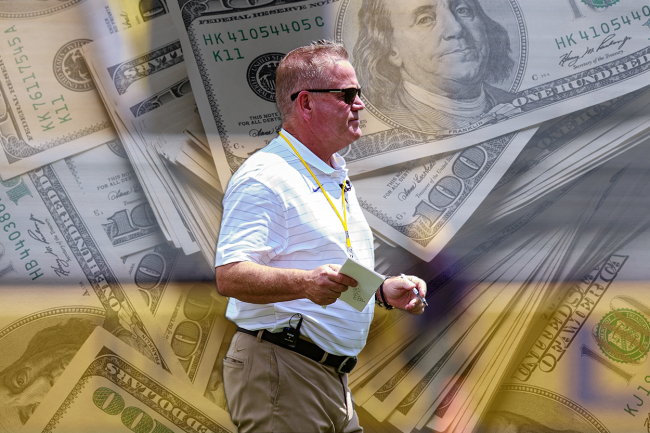 Name, Image and Likeness has created a lot of buzz in the world of college football. Although money has always played a role in recruiting, numbers are inflated and now things are being done above the table.

As a result, there has been a massive outcry against what is going on across the sport with recruiting and alleged pay-for-play violations. Coaches, athletic directors, fans and even some players alike have spoke out about the changing landscape.

Among those who have chimed in is Brian Kelly. As the head coach at LSU, he is right in the heart of the SEC.

But that was not the case last year. Less than six months ago, Kelly was the head coach at Notre Dame before leaving for Baton Rouge almost overnight.

On his way out, Kelly reportedly ghosted his assistant coaches and told his players he was leaving via text. In doing so, he scheduled a 7:00 a.m. meeting, gave an extremely short, very awkward breakup speech to his players and assistants, and left in a hurry for Louisiana.

The way in which Brian Kelly left South Bend makes his most recent comments about NIL and the transfer portal extremely ironic.

What Kelly said in a recent appearance on ESPNU Radio gets even more ridiculous considering that he left Notre Dame for a lot more money at LSU.

While discussing the direction that college football is headed with NIL, Kelly made some fair points. He raised concerns that have been brought up by multiple other college coaches and said that he is in favor of players profiting off of their person.

However, he said that players entering the transfer portal because they want to get paid to play is not sustainable. Kelly also spoke about retention and wanting to develop, recruit and retain his players.

🏈 @CoachBrianKelly doesn’t like the direction college athletics is trending towards with regards to name, image and likeness. #GeauxTigers

Kelly’s comments are fair. Wanting to sign a recruit out of high school, mold his craft, and eventually reap the benefits of the teachings with in-game play is fair.

To discredit players for leaving to get paid elsewhere while complaining about retention is not. Kelly left Notre Dame in less than 24 hours to get paid by a bigger program, so to do so is actually more hypocritical than it is ironic.

Coaches should be allowed to leave their current post for more money, but the players that are producing the product that allows coaches to get paid should not? That’s essentially what he is saying, when put into context from a 30,000-foot view

Wanting changes is one thing. To speak down on players for following the dollar signs after doing exactly that is another.