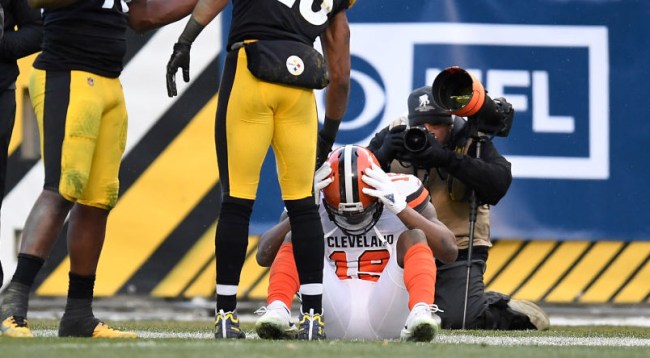 Back in November, Cleveland Browns fans were already eagerly anticipating the team doing the impossible and becoming only the second team in NFL history to go 0-16 for the season. At the time, the Browns were just 0-9, but Browns fans being Browns fans, they just had a feeling.

In fact, their feeling was so strong that the team could achieve the “perfect season” that they began raising money for a parade to celebrate the teams inglorious milestone, should it happen.

Naturally, because, Browns, they came through in truly magical Browns fashion when wide receiver Corey Coleman dropped a pass on fourth and two and would have given the Browns a first down that would have put them in scoring position to possibly win the game. Instead, it was game over and boom, the parade is on!

A 0-16 “Perfect Season” Browns parade, sponsored by @Excedrin, will take place on Jan. 6. Parade will go around stadium to form an “0” pic.twitter.com/yMPEAwYYjQ

Not only did the fans raise the $10,000 for the parade, they topped their goal by over $2,500. They even got a super appropriate sponsor for the parade: Excedrin.

This is the official fundraising site for the Cleveland Browns Perfect Season Parade 2.0. As we all know, the Cleveland Browns have had a magical season full of fun & utter embarrassment. Wikipedia defines embarrassment as, “an emotional state that is associated with moderate to high levels of discomfort, and which is usually experienced when someone has a socially unacceptable or frowned-upon act or condition that was witnessed by or revealed to others.” This is the condition we deal with every Sunday as a Browns fan!

I urge you to come out on January 6th to show your support for our owner, Jimmy Haslam, and his entire front office for the product they put on the field every Sunday (not Monday night, of course, because we aren’t good enough to get that slot). We will parade around First Energy Stadium and culminate with a post-party at a soon to be determined location.

The official paperwork was filed this morning with the @CityofCleveland!! The @Browns Perfect Season Parade (0-16) moves on!! #GPODAWUND pic.twitter.com/NoDBUvF7R2

After going a combined 1-31 over the past two seasons, it’s only fitting that Browns fans finally have something to celebrate. All one has to do is look at this lowlight reel a Browns fan cobbled together of the 2017 season to feel their pain.

On the plus side, the Browns now have two picks in the top five of the 2018 NFL Draft. Maybe they can draft Josh Rosen, err, I mean, Sam Darnold and finally get that franchise QB they’ve been searching for forever.

The ENTIRE Browns Quarterback Graveyard WILL be attending and participating in the parade if it actually happens. And yes Johnny's swan will be there too @CLETalkingHeads @finkn23 pic.twitter.com/5U9GN9otuj

The Browns…Putting the O in Ohio