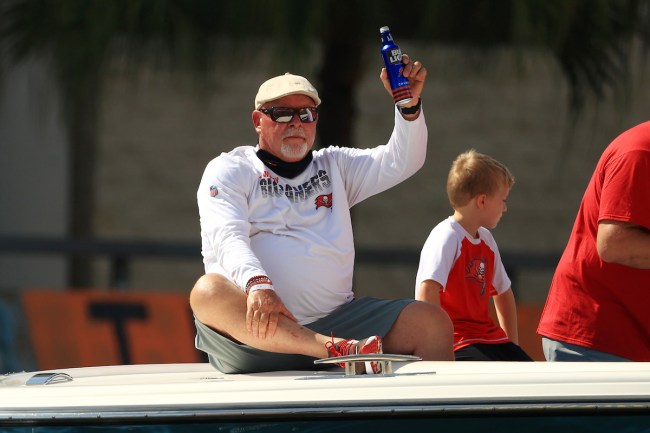 Buccaneers head coach Bruce Arians just had a hunch, guys. You know when your gut just gives you one of those feelings? Like, when you just know something’s bound to happen for you but you can’t quite explain why? Yeah, that’s what happened to Arians prior to this NFL season… despite all the uncertainty surrounding the COVID pandemic.

While plenty of fans had doubts that we’d be here right now — watching a team like the Bucs celebrate a Super Bowl 55 victory during a wild championship parade — the NFL made it. It successfully avoided major disaster with tons of COVID testing, some changing to the schedule and a little bit of luck. More importantly, no player nor coach got seriously sick (or worse), showing that the league could get through the season as planned.

But before we got here, there were plenty of concerns about what the NFL season was going to look like, and the risks it could potentially bring people. At 68 years old and a little heavy, Bruce Arians was one of those high-risk people, which is why nobody would’ve blamed him had he decided to opt-out prior to the season kicking off. Hell, Arians even said his family urged him to do so, but that he went against the suggestion because he felt like something “magical” could come for his Buccaneers team.

Per the Los Angeles Times:

“I went to work, came home,” Arians said. “We haven’t gone out to dinner since July. We have all these open-air restaurants here, but I just couldn’t risk it. Both of us are high risk.”

Despite his decision to coach the Buccaneers during a pandemic, Bruce Arians admits it wasn’t easy. In fact, he even told the L.A. Times how he had to be the “mask police” and enforce the protocols on his players to make sure everything ran smoothly and followed the league’s rules.

“On the first day, the elevator says one person. The elevator door opens and it’s a team employee and Gronk. I just ripped their ass. ‘You … guys can’t read? That … doesn’t say “two,” it says “one,”’ The one guy’s eyes get big and Gronk says, ‘Nice to meet you, Coach.’

Now that he’s led his team to a Super Bowl 55 victory, Arians can relax a little bit and avoid the day-to-day grind of coaching his players and maneuvering the COVID rules. But you better believe it all took a toll on him, as it was always the elephant in the room anytime one of his guys showed up on the injury report during the NFL season.

Now that Bruce Arians is vaccinated and the NFL season reached its conclusion, the head coach seems to be riding high. That’s the typical feeling after winning a Super Bowl, so the 68-year-old should soak it all up.