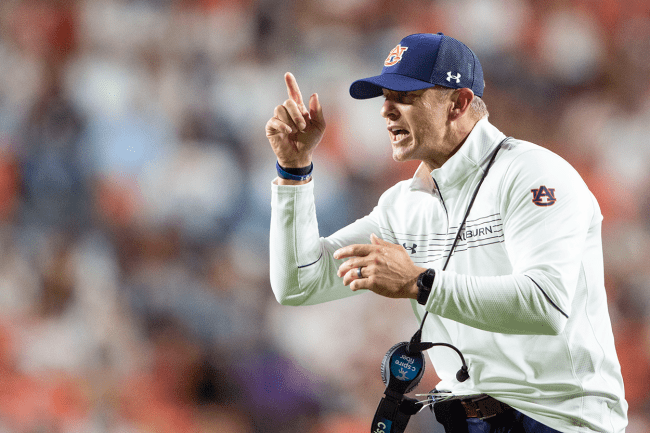 Bryan Harsin’s first year at Auburn resulted in one of the most bizarre offseason controversies in college football history. After finishing the year at 6-7 with a loss in the Birmingham Bowl, a lot of rumors began to circle around the program.

A report on February 3, 2022 said that Harsin’s immediate future at Auburn was in question. From there, social media ran rampant with gossip about the 45-year-old’s personal life.

In addition, former Tigers players came out against the culture that Harsin built in his first year with the school and the team’s defensive coordinator took a huge pay cut for a lateral, or lesser, move. Meanwhile, Harsin and his family, as well as other former players came out vehemently against the allegations.

Ultimately, after an internal investigation, Harsin kept his job and he proceeded to celebrate with the student section at a basketball game like a legend. It was a whirlwind.

Prior to the first session, Harsin spoke with ‘Next Round Live’ about a variety of topics. Of course, the offseason was one of them.

During the extensive interview, Harsin addressed the tumultuous situation.

From a personal standpoint, Harsin said that it was very difficult.

“Personally one of the more difficult times that my family and I have ever been through, really,” he said. “Just so many things that played out on social media, some of the attacks, the information that were baseless and kind of dealing with that is something that we’ve never been through.”

As a coach, Harsin said that he understands part of the scrutiny comes with the job. But for the unsubstantiated rumors, he says they went too far.

“Just some of the things my family and I went through, just went too far, at the end of the day,” Harsin said. “When it was all said and done, it’s still has left some scars and things that we’re dealing with and one thing I’ll say about my family is that they’re awesome. They are very tough, this was something for us that we needed to go through and so I’m really proud of them, proud of my wife. She’s the rockstar, all right, of the family.”

Harsin also added that he and his family know who they are. They stand firm in their values and how they conduct themselves.

As for now, Harsin, his family and his team are moving on.

The past is the past and it’s on to spring practice. However, he has some strong thoughts about social media, calling it a “sewer,” and called out the “mob” that came for him.

“You know the truth, you know what’s being said is false, but that’s part of what social media brings,” Harsin said. “Sometimes there’s some positives to it. I talk to our players about it, there’s a lot of stuff on there, that’s just like a sewer that you have to be careful of. And like when this was over, the mob just moves on, they’re on to their next victim.”

It has been a crazy couple of months for Harsin, and he also addressed his (lack of) trust for Auburn boosters in the interview. Should the on-field results not trend upward in 2022, things will be interesting.