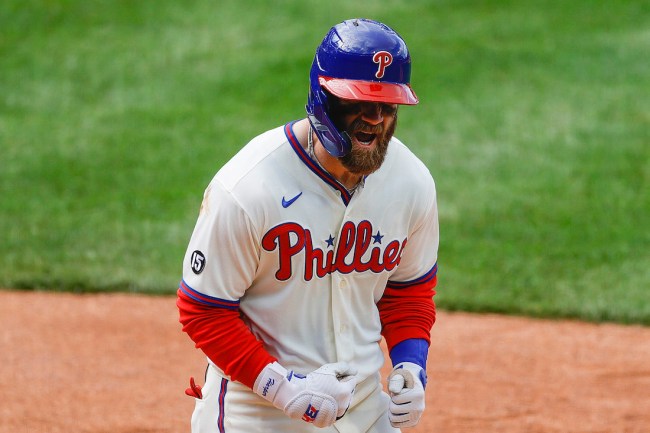 In case you missed it, Bryce Harper got his face hammered by a 97-mile-per-hour fastball during an at-bat against the St. Louis Cardinals, with the Philadelphia Phillies slugger instantly left bloodied on the side of his face where the ball hit. Now, if this were some wuss like you or me, we’d probably be down for the count, concussed, and crying to our parents about the enormous amount of pain we were in after such a devastating hit by pitch. Just look at how gnarly the scene was.

Scary scene as Bryce Harper takes a HBP to the face but leaves the game under his own power pic.twitter.com/CCcVq1AMF0

Sheesh, I couldn’t imagine standing there helplessly waiting for a 97-mile-per-hour heater to just plunk me in the face — no matter how much I’d try to avoid it doing so. And while Harper got roughed up, the Phillies star gave a positive update after the game, taking to Instagram to share good news with MLB fans.

"Face is still there. We're all good."

Bryce Harper says "everything came back good" after taking a 97 mph fastball to the face.

Uh, looking at Bryce Harper in that video, are we sure that this guy doesn’t have a face made from steel? Like, how in the hell did the dude get nailed by a 97-mile-per-hour fastball and not end up with an eye that’s swollen shut? I remember getting hit by a 40-mile-per-hour pitch in third grade and having a shiner worse than Bill’s in The Sandlot, which sent me to the hospital to make sure I didn’t royally mess up my vision. This guy took a pitch about 2.5 times faster and walked away unscathed. Baseball players, man, they’re tough AF.

Now who knows how long Harper might be out of the lineup for, but, for all intents and purposes, the outfielder looks like he could get back in the box and get back to being himself sooner rather than later. But one has to worry about any psychological impact of taking such a crazy fastball to the face, and if it’ll be in the back of Harper’s head the next time he stands at the plate. Hopefully not.

As for the man who plunked Bryce Harper, Cardinals pitcher Genesis Cabrera, he was more than a little wild all night, and actually hit the next batter after Harper, too, Didi Gregorius. For his part, Cabrera did apologize after the game, adding he was just “overthrowing, and that’s why I missed the pitches.” That’s a good excuse on paper, but, damn, the dude could’ve literally killed a guy for being so erratic.