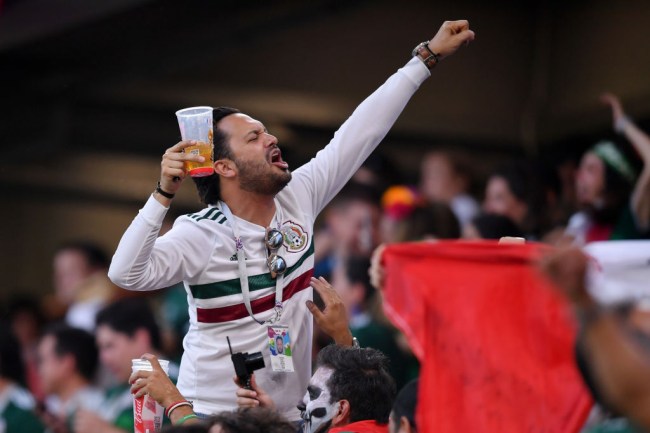 On Wednesday, Germany took a massive dump on the proverbial mattress when they lost to South Korea and helped Mexico secure its spot in the Round of 16 at the World Cup. Fans of Landon Donovan’s new favorite team managed to set off earthquake sensors while celebrating a goal earlier in the tournament so I can only assume at least a couple of buildings in Mexico suffered some structural damage once the team officially advanced.

I’ve watched basically every World Cup game since this year’s festivities kicked off, but as a citizen of a country that is apparently worse at soccer than I thought, I don’t have a horse in the race. I’m assuming many Americans feel the same way— but if you’re a Californian (and a fan of free alcohol) you might want to think about hopping on the Mexico bandwagon.

Before the start of the World Cup, Bud Light— who previously treated the people of Philadelphia to beers after the Eagles won the Super Bowl— issued a decree stating they’d be doing the same for the people of California if Mexico could overcome ” The Curse of the Fifth Game” (they haven’t been able to make it past the first contest of the knockout round since 1986).

Mexico now has the chance to break the curse and fulfill yet another prophecy from The Simpsons but will have to deal with a more-than-formidable Brazilian squad in order to advance to the quarterfinals. Neymar and The Boys are favored to win the matchup so Californians will have to make sure to spread those vibes they’re so notorious for giving off when Monday rolls around.