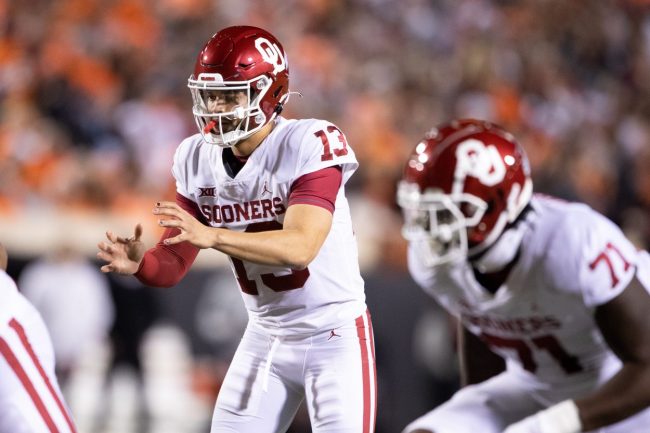 It is day 24 of Caleb Williams watch and supplies are limited, moral is low. However, a new discovery has sparked theories about where he might end up.

Earlier this week, it was reported that Wisconsin may have emerged as a legitimate contender to land Williams’ commitment. The Badgers are likely going to hire a new offensive coordinator who has ties to the five-star quarterback and people believe that the school’s athletic director may have teased both announcements on Wednesday.

Williams has also been tied to LSU. And since the day that he first entered the portal, the expectation is that he will end up with former head coach Lincoln Riley at USC.

That remains the case.

As of right now, there is no indication that the Trojans are not still in the lead. In fact, many people believe that the delay is tied to USC’s patience in dotting every i and crossing every t to ensure that every last detail is in order should Oklahoma or the NCAA try to claim tampering.

If a new development is any indication, that theory could be true. His name was discovered in the student database.

Over the past three+ weeks, USC students have been searching the database for “Caleb Williams.” It finally popped up on Wednesday afternoon.

It isn’t entirely clear how long this Caleb Williams has been enrolled. However, this is not the first time that somebody thought to search his name. If that person didn’t find anything before, but found Williams on Wednesday, then the math might add up.

As for the reported email, it is also up and running in the system.

For all we know, as of right now, this could be Caleb Williams, a junior getting his degree in Classical Performance & Composition from the Thorton School of Music. If that is the case, the poor guy’s email has surely been hammered with football-related emails in the last 24 hours.

Who is to say that it isn’t the Caleb Williams, who transferred to USC from Oklahoma and was officially entered into the database this week. If it isn’t, wouldn’t he have been in the database prior to Wednesday?