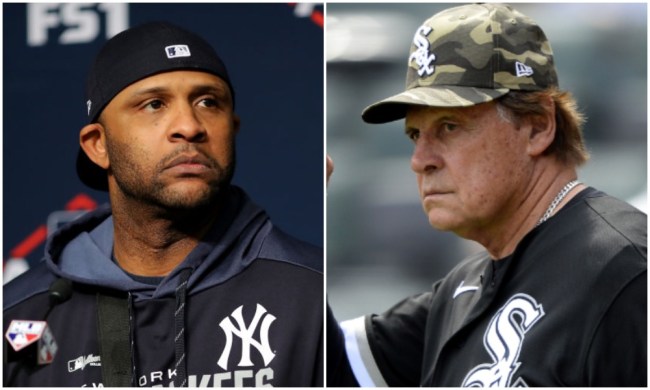 Everyone, and I mean everyone, knew that some sort of old-man baseball drama was going to happen with the White Sox this season as soon as the organization announced the hiring of 76-year-old Tony La Russa as its manager. Well, that drama unfolded just 40 games into the season, and former Yankees southpaw CC Sabathia has some feelings about it.

During the White Sox blowout win over the Twins on May 17, Yermin Mercedes swung and hit a home run on a 3-0 pitch against a position player. After the game, La Russa said Mercedes’ home run was “a big mistake,” called him “clueless,” and that there would be “consequences he has to endure within our family.” It was your classic ‘unwritten rules of baseball’ junk that keeps the casual and new-age fans away from the game.

In the following game against the Twins, Tyler Duffey threw at Mercedes and La Russa didn’t have a problem with it.

Sabathia joined the ‘R2C2‘ podcast and did not hold back about the La Russa situation.

“That’s just f—ing stupid. It’s stupid period, I’m sorry,” Sabathia passionately explained. “The s–t is terrible. He shouldn’t be f—ing managing that team, and if you’re not going to step up and have your player’s back, what’s the point of being the f—ing manager of the White Sox? S–t is stupid as f–k, sorry.”

“If you’re going to put a f—ing position player in there to pitch, guess what? If he’s going to lob s–t over the plate, we going to f–king tee off.’ Put a 10-run rule up there.”

Sabathia shares the same opinion about the situation as every other baseball fan under the age of 70.