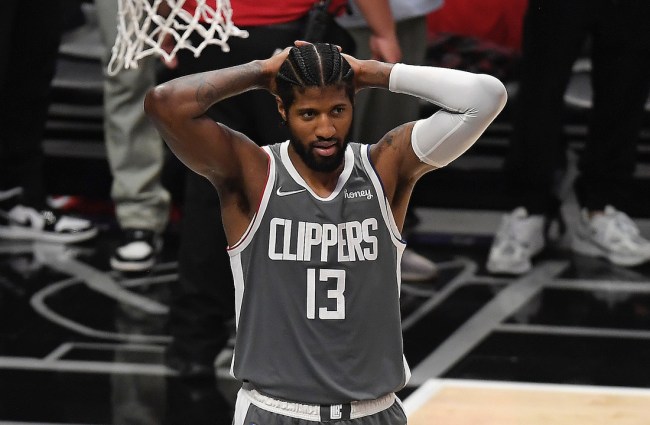 When it comes to speaking the cold hard truth, no one does it better than Charles Barkley. The Basketball Hall of Famer and current TNT personality knows that everything he says will get attention, so, when he opens his mouth on TV, the dude refuses to hold back in giving his opinions. It’s part of what makes him so entertaining to begin with.

Anyone watching Tuesday’s NBA on TNT witnessed the latest example of Barkley doing just this, as the crew was discussing Los Angeles Clippers star Paul George‘s whining about criticism during these NBA Playoffs.

George played out of his mind on Monday in a must-win Game 5 against the Suns in the Western Conference Finals, helping extend the Clips’ season. Finishing with 41 points, 13 rebounds and six assists, the seven-time All-Star proved why he’s considered a superstar. However, PG-13 seemed fragile afterwards when asked by a reporter about whether he thinks he’s picked on more than other NBA stars.

Paul George was asked if he, too, thinks he's picked on more than other stars: "I do. And it's the honest truth. It's a fact. But I can't worry about that. It comes with the job, I guess."

Whether true or not, Charles Barkley didn’t want to hear it. Instead, Chuck used some time to completely slam anyone defending Paul George from harsh criticism, simply saying that it comes with the territory as a great player. Here’s what Barkley said on Tuesday.

“I’ve gotten criticized because I hadn’t won a championship. Michael Jordan before he won a championship, ‘Yeah, he can’t win.’ Shaq, Kobe, everybody got criticized. This false narrative, I hear these jackasses on television talking about George getting scrutinized more than other people. Give me a freakin’ break!”

Chuck reacts to PG saying he gets criticized more than other NBA stars. pic.twitter.com/20bLt2laj8

Not only did Barkley slam the idea of George being scrutinized more than other stars, but his colleague, Shaquille O’Neal, agreed. As two of the NBA’s best all-time players, these guys understand that having thick skin against such criticism is part of being a great player. In fact, most superstars don’t just accept it, but they use the hate as motivation. Paul George doesn’t appear to do that.

Let’s not forget George’s part in bringing added attention to himself by proclaiming himself “Playoff P” during the 2018 NBA Playoffs, telling the media the following:

“It’s a fun guy to watch. It’s an out-of-body person where I just lock in and put myself in a different zone.”

Obviously, fans and media use that as motivation when criticizing George, and often troll him online if the star has a bad postseason game.

So while George might hate being picked on by media, Charles Barkley is here to remind him that if he ever expects to be considered an all-time great in the league, he needs to silence the doubters with his game, not his complaining. That’s how other stars did it before, and how future stars will have to do it as well.