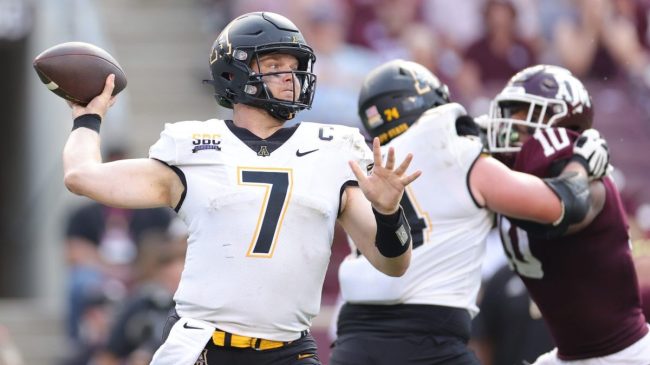 Appalachian State quarterback Chase Brice took a long and winding road to college football stardom. A three-star recruit in the class of 2017, Brice first committed and signed to play for the Clemson Tigers.

Brice redshirted his first year on campus and then saw limited action in the two years that followed. He appeared in 23 games but threw less than 200 passes for 1,023 yards, nine touchdowns and four interceptions.

He then opted to try his luck elsewhere with a transfer to Duke to play for QB guru David Cutcliffe. Brice started 11 games for the Blue Devils in 2020 but struggled mightily. He passed for 2,170 yards, 15 touchdowns and a whopping 20 interceptions.

That led to another transfer, this time to Appalachian State.

The veteran QB appears to have found his home with the Mountaineers. Brice exploded for 3,337 yards, 27 touchdowns and 11 interceptions in 2021 to lead App State to a 10-4 record.

Now back for his final go-around, Brice the big man on campus in Boone and is stealing the heart of the country. But it turns out the well-traveled QB is more than just a good player, he’s a good dude as well.

The Mountaineers are currently the toast of the town in the college football world. They shocked everybody with a hilarious upset win at Texas A&M. That brought College Gameday to Boone, North Carolina and Appalachian State somehow managed to one-up itself.

Brice got a chance to play the hero with a last-second Hail Mary to pull off an insane comeback victory over Sun Belt foe Troy.

But what Brice did afterward is what really stole the show.

Chase Brice making sure everyone is okay storming the field. He’s perfect. pic.twitter.com/4a1yJBcOEa

App State students quickly came pouring onto the field following the Hail Mary. But rather than celebrate with his teammates or fans on the field, Brice went to the stands and one by one helped make sure students got onto the field safely.

STOP THIS IS ADORABLE 😭 https://t.co/q4xdqkOw5Z

What a great dude.

Something tells us the legend of Chase Brice will live on long after he’s left Appalachian State.